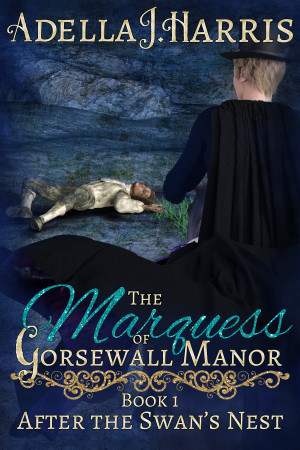 The Marquess of Gorsewall Manor

By Adella J Harris
Rated 5.00/5 based on 2 reviews
After being caught up in a raid on a molly house, Thomas Brook escapes on his way to the pillory. He's rescued by the handsome Lord Elmsby and taken to Gorsewall Manor where he is offered a position cataloging the library. It would be ideal except for the strange sounds in the library walls. Then a body is found on the moors and Thomas must find out the truth of what happened at Gorsewall Manor. More
In Regency England, three friends deal with the aftermath of a raid on a molly house they all visited.

After being caught up in a raid on a molly house, Thomas Brook escapes on his way to the pillory. Collapsing from exhaustion on the moors of Yorkshire, he's rescued by the handsome Lord Elmsby and taken to Gorsewall Manor. As he recovers, Lord Elmsby offers him a position cataloging the library. It would be an ideal situation, isolated, with a handsome, solitary lord and servants who don't ask many questions, except for the strange sounds in the corners of the library and the feeling he's being watched. And then a body is found on the moors, a body that could be the long missing fiancee of Lord Elmsby, and Thomas must find out the truth of what happened at Gorsewall Manor.

About the Series: After the Swan's Nest

In Regency England, three friends deal with the aftermath of a raid on a molly house they all visited.

Also in Series: After the Swan's Nest

Reviews of The Marquess of Gorsewall Manor by Adella J Harris

The Marquess of Gorsewall Manor (2018) by Adella J. Harris is the first book in the After the Swan’s Nest series by the author.

The story follows Thomas Brook who is been sent to the pillory after been caught in a molly house raid where he was getting intimate with his friend William. In the era this book was set, it was illegal for two men to be intimate. But thankfully Thomas excapes, goes on the run and eventually ends up at Gorsewall Manor which is the home of Lord Elmsby who Thomas fancies instantly and vice versa. He begins working in the library of the house and gradually he and Lord Elmsby get to know each other and their romance begins to bloom. But among all this, the body of Lord Elmsby’s fiancée from years back is found out on the moors which leads to Thomas investigating her death in order to prove Lord Elmsby’s innocence.

This is a wonderfully engrossing read which combines romance, mystery and historical fiction all into one. I think it is great for awareness that the author wrote about the cruelty and injustice many people faced back years ago due to hatred over their sexual and romantic feelings. Those scenes were incredibly hard to read. But I think it is right that the author showed these situations in an honest way, showing how ugly the actions of many people back then were. I was so glad that Thomas escaped but I felt awful for William who without been in the book very much was a character I liked because he seemed like this ordiniary bloke but who had a steel and a hero way about him when push came to shove. So it was great to see that book 2 in this series is William’s story with his Earl.

The book has wonderful characters. Thomas and Julian (that’s the Lord’s name) have great chemistry, there is a great build-up in their romance with a definite will-they-won’t-they plot where you are on the edge of your seat hoping they will. Harris beautifully shows how much they care about each other through Thomas putting himself in danger of being caught to clear Julian of the murder and Julian deciding that it is best for his name to continue to be rumoured about in connection to the murder rather than put Thomas in danger. It’s dead cute. While Thomas is struggling to survive, he sells himself and it is so lovely to see that Julian doesn’t judge him badly on his previous work.

This book is stunningly wrote, very detailed and paced wonderfully. It has a great mix of genres which are combined very well. The book speaks about important issues and the entire book is very well-written. On the first book, this bodes very well for this series.

A new author for me and one I'll be visiting often. A masterfully written regency period mystery entwined by a clandestine romance. The main characters were attractive and endearing and complex. The secondary characters were just as engaging. Collectively I was mesmerized by the story, though felt the mystery underdeveloped. I was sad to have it end, however - with HEA.