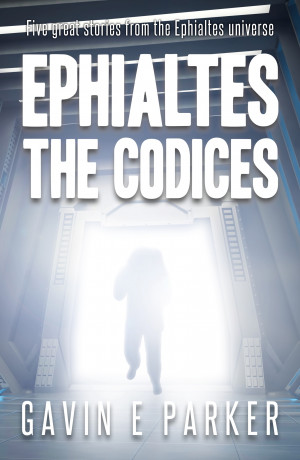 By Gavin E Parker
The Ephialtes Trilogy chronicles the conflict between Earth and Mars, triggered by Mars' secession from the USAN in the aftermath of World War IV. Ephialtes The Codices makes up the connective tissue between books one and two of the trilogy. This collection comprises all four previously released codices together with the exclusive Ephialtes Codex V: Why Am I So Clever? More
Why Am I So Clever?

Dr Daniel Kostovich, head of R&D at Venkdt Mars Corp and Special Adviser to the MSS, has always been a smart cookie. When he starts speculating on the provenance of his abilities he finds more questions than answers.

As various possible solutions come and go Kostovich works on the pressing issues facing Mars - food production, defence equipment, and the unresolved conflict with the USAN. Is the ultimate answer to his question unknowable and, given the storm clouds gathering on the horizon, shouldn't his undivided attention be elsewhere?

Be All You Can Be

When MSS Officer Kristen Stahl is seriously injured in the Battle of Allentown Spaceport the stability of her old life is thrown upside down. Along with her injuries she has to cope with a failing relationship and the possibility there is no longer a place for her in her beloved Martian Security Service.

An uncertain future awaits all of Mars, but it seems the fates are determined to test Officer Stahl to the very limit of her capability. Can she fight her way back to where she needs to be, or is the simple act of survival victory enough?

The USAN isn't the place it used to be. The Martian deuterium embargo is causing huge economic damage, and the public is restive. Student Adam Wilson believes in his country but is reluctant to voice his feelings in light of the burgeoning protest movement's belligerent attitude.

Following his own brush with authority Adam has to reassess his beliefs. Could it be that their once great president has stepped over the line? With a huge schism looming Adam is going to have to pick a side, but in a world filled with uncertainty it will be no easy choice.

The huge biodomes in southwest Marineris supply Mars with food. Landing a job there is a dream come true for Kimberly Gooding, whose ultimate goal is to save enough money to emigrate to Earth.

When she's called on to do some work outside the domes an urban legend about the ghost of a dead commander gives her pause. The conflict between her rational mind and some baser instincts takes centre stage, and her trust in her workmates is called into question. Is the problem lurking somewhere outside the domes or is it buried deep in Kimberly's subconscious?

Joining the army is simply a way out for a young person from the backwaters of the USAN, and landing a plumb posting at the garrison on Mars seems to be the icing on the cake. However, the trip of a lifetime coincides with the Martian bid for independence.

As the cushy posting turns into something far more harrowing our narrator reflects on the events that took him to Mars and casts a fearful eye on what the future might hold.

The Ephialtes codices look back to the first book of the trilogy and forward to the second, exploring characters and events from each in new and unexpected ways. Does the ghost of a lost commander really roam the Martian outlands? How would it feel to be a patriotic young American coming to realise it may be necessary to reassess your values? As a trooper injured in the episode depicted at the close of Ephialtes, how would you cope with your rehabilitation? Just why is Kostovich so damned clever?
Available ebook formats: epub
Price: $4.85 USD
Buy Add to Library Give as a Gift
How gifting works
Create Widget
Tags: scifi anthology mars martian ephialtes
About Gavin E Parker

Gavin E Parker is from the Isle of Thanet in southern England, where he has lived and worked his whole life.

He has dabbled in creating music, film and video in the past and is currently writing novels, short stories and blogs.

Inspired by the rapidly expanding possibilities open to publishers in the twenty-first century, in 2014 Gavin set about writing his debut novel, Ephialtes. Ephialtes is the first of a trilogy of books chronicling the war between Earth and its former colony on Mars. A series of shorter pieces - the Ephialtes codices - set in the same fictional universe complements the main novel trilogy.

Having worked in healthcare, local government and education he has a mildly jaundiced view of the human condition, but still maintains good humour about it. Things could be worse, right?

About the Series: The Ephialtes Codices

The Ephialtes Trilogy chronicles the conflict between Earth and Mars, triggered by Mars’ secession from the USAN in the aftermath of World War IV. Alongside the core novel trilogy are a series of shorter pieces set in the same fictional universe, providing the connective tissue between books one and two of the trilogy. These are the Ephialtes codices.

Also in Series: The Ephialtes Codices

Reviews of Ephialtes The Codices by Gavin E Parker

You have subscribed to Smashwords Alerts new release notifications for Gavin E Parker.

You have been added to Gavin E Parker's favorite list.

You can also sign-up to receive email notifications whenever Gavin E Parker releases a new book.