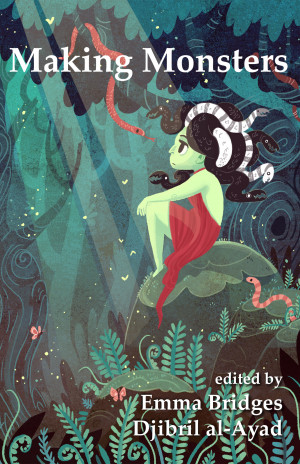 Twelve short stories, three flash fiction, three poems, and six essays from a broad field of authors, scholars and practitioners cover a range of approaches to and reimaginings of ancient monsters both familiar and less-known. These are not the monsters you found in Homer or Ovid—they make look like them, but these have much louder voices.
Available ebook formats: epub
Price: $5.00 USD
Buy Add to Library Give as a Gift
How gifting works
Create Widget
Tags: short stories mythology ancient history monsters sirens medusa classical studies

I love mythology and folklore and, having grown up in the U.S., the mythology I was first introduced to (if you don't count Christianity!), was Greek. So I was really happy when I found this book and it was, surprisingly, available at Smash Words.

I've read all the fiction pieces I wanted to. Some were written in the faux present, which I can't stand. Others were mood pieces, but about half were fantastic tales based on the what-if-the-myths-were-true-somehow? premise. The Giulia Effect by Barbara Davies and The Vigil of Talos by Huw Steer stood out for me.

I'm not a poetry fan, so I skipped that. The essays varied in appeal, but were pretty much what I've read in academic outlets. There's was a political correctness running through all of them which I found tedious.

If your looking for a few new takes on the classics of Greek mythology and don't mind modern attitudes paving over the authoritarian, often violent, fatalism of the originals, then this book will probably please.

You have subscribed to alerts for Emma Bridges.

You have been added to Emma Bridges's favorite list.

You can also sign-up to receive email notifications whenever Emma Bridges releases a new book.