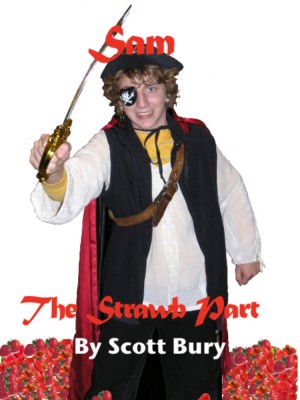 By Scott Bury
Rated 4.67/5 based on 3 reviews
Sam dresses up as a pirate and attaches a jolly roger to his rickety bicycle to hijack as many strawberries as he can. The five-century-old Commodore Swinkill tries to hunt him down. The strawberry-buckling chase criss-crosses Canada and unites the people behind the young buccaneer.

All proceeds from this story go to Children at Risk in support of children with autism spectrum disorders. More
What happens when a thin boy dresses as a pirate, attaches a jolly roger to his bicycle and starts to hijack strawberries?

When the pirate starts handing his booty over to poor children, the people take his side. But the evil fruit monopoly doesn't take kindly to pirates. They hire the notorious pirate-killer, Commodore Tiberius J. Swinkill, to hunt Sam down.
Thus begins the epic chase across Canada. It's broken bicycle against a sailboat on wheels in a chase for the hearts and strawberries of the nation!

This swashbuckling tale of fury and fruit is for children, parents and everyone who loves strawberries, children or pirates.

Scott Bury is a journalist, editor and writer living in Ottawa. His articles have been published in newspapers and magazines in Canada, the US, UK and Australia, including Macworld, the Ottawa Citizen, the Financial Post, Marketing, Canadian Printer, Applied Arts, PEM, Workplace, Advanced Manufacturing and others.
He has two almost-grown children, an orange cat and a loving wife who puts up with a lot. You can read more of Scott’s writing at scottswrittenwords.blogspot.com and scottstravelblog.wordpress.com, and on his website, http://www.writtenwords.ca. Follow him on Twitter @ScottTheWriter. 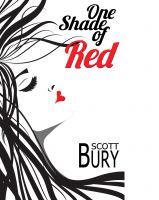 Reviews of Sam, the Strawb Part by Scott Bury

There are two solid reasons to buy Scott Bury’s short story, Sam the Strawb Part. (1) All proceeds go to Children At Risk, an Ottawa-based charity for kids with autism spectrum disorders, so for a mere $1.99 you’re contributing to a worthy cause. (2) For a mere $1.99, you’re getting a entertaining read that’s worth a lot more.

The hero of this fractured fairy tale is a boy who loves strawberries so much he plunders them from unsuspecting shoppers. In other words, he’s a strawberry pirate. Though, as Bury tells us, “Sam had a habit of talking very quickly and slurring his words without enunciating, so he described himself as ‘a strawb part.’”

Bury has written one of those stories that can be read by children but enjoyed by adults, thanks to its liberal doses of absurdist humor. Here’s a sample: “The Senior Director was the most obese man on the planet. He wore a dark grey suit and a white shirt that bulged at all the buttons. There was not a tie in the world that could go around his neck, so he wore an open collar.”

The Senior Director is one of the executives of the East Canada Fruit Company. Alarmed by the great losses to their strawberry inventory, they mount a campaign to capture Sam. The chase leads to wild adventures, media notoriety and eventually to lessons learned about life (including how to coach the Canadian team for the Tour de France).

In other words, the story covers a lot of territory in 20 pages. For $1.99, you could do much worse.

This was a beautifully written children’s book. Loved the story and can really see the children getting into it. Their imaginations are fantastic and I am sure there will be a lot of children pretending to be Sam, the Strawb Part.

Sam is a young boy whom loves strawberries and uses his wits and cunning to steal strawberries from unsuspecting mothers at the grocery store. Because of his appearance they feel for Sam and hand over their strawberries. The East Canada Fruit (Fool) Company is not impressed and hires a pirate to capture and stop Sam from stealing all the strawberries. This is where the adventure begins. The chase sets off around the country and Sam is always one step ahead.

This is Robin Hood meets Pirates of the Caribbean for a children’s book. Fantastic and another fantastic fact is that all proceeds of this book goes to charity, Children at Risk, a registered charity that supports families of children with autism spectrum disorders. What a wonderful cause, so please help support and read this lovely story.

Super cute and imaginative story that put a smile on my face. Kids and grownups alike would certainly appreciate it. And all proceeds go to a good charity.

Would love to see this with accompanying illustrations someday.

You have subscribed to alerts for Scott Bury.

You have been added to Scott Bury's favorite list.

You can also sign-up to receive email notifications whenever Scott Bury releases a new book.