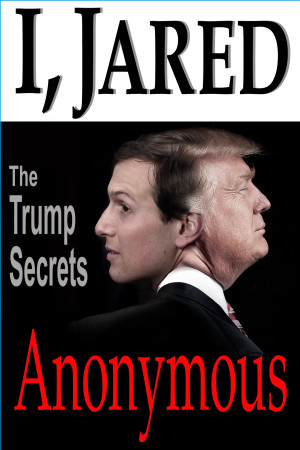 I, Jared: The Trump Secrets

By Anonymous
Jared Corey Kushner was a relative unknown. Outside the real estate development world of New York City few heard of him. Of those who did even fewer knew much about him. After marrying into the Trump family his prominence grew. It rose meteorically when he and wife Ivanka entered the world of Beltway politics. Jared has since become one of the most politically influential people of our time. More
Donald J. Trump’s son-in-law is now on a world stage. The President has asked him to find peace in the Middle East. He has asked him to modernize the federal government. He is the White House Innovations Director. He is the Senior Advisor to the President.Yet Jared is not on any official payroll. He had difficulty obtaining a security clearance. He has no experience in government. Few people truly know him well. “I, Jared: The Trump Secrets” is a look inside the man. It examines the historic events surrounding the 2016 presidential election. It discloses the secret roles Jared played in the Trump campaign. The book describes the personal intrigue, political struggles and financial entanglements that swirled around him. It tells how Jared almost lost the Kushner family’s real estate empire. It tells of his deep religiosity. It reveals previously undisclosed information that will stun and surprise. Shocking insider claims and bombshell allegations promise to rock the Trump administration.
• I, Jared: The Trump Secrets will show the real role Jared played in the run-up to the Trump presidency
• The book will reveal the degree to which Ivanka resisted the idea of entering the world of politics
• It will disclose the real reason Jared pushed his wife to change her mind and risk it all
• It will describe the central role Jared played in helping secure funds for the Trump campaign
• It will show how Jared and Ivanka frequently bickered and how their marriage is not as rosy as depicted
• It discloses their pet names. Ivanka calls Jared, “Jare”. Jared calls Ivanka “Evie”. They both call Trump “dad”
• The book brings to light Jared’s medical issues including chronic dry mouth, or xerostomia, and the resulting poor dental health
• The book reveals Jared was diagnosed with sleep apnea. He and Ivanka have slept in separate bedrooms since they got married due to his snoring
• The book tells how Jared regularly checks his comb and the shower drain for hair loss out of a worry he is developing a bald spot
• In a shocking revelation the book discusses the moment Jared’s parents suspected he was autistic and had him tested. “I, Jared: The Trump Secrets” reveals the results of the test
• The book will disclose the degree to which Donald Trump dismisses his son-in-law. Trump frequently berates Jared in private and has no qualms calling him names in front of Ivanka
• Trump blames his son-in-law for the financial mess which impacted Kushner Companies.
• In a world exclusive, the book will disclose that Jared Kushner is a dual national. He became a citizen of Israel through his parents and holds an Israeli passport to this day
• In another world exclusive the book reveals Jared is fluent in Hebrew.and tells of his life-long friendship with Benjamin ‘Bibi’ Netanyahu, the Prime Minister of Israel
• In a bombshell allegation, the book will describe Jared’s secret trip to Israel to get help for the flagging Trump campaign and secure a bridge loan to rescue his failed investment in 666 5th Avenue
• Most sensationally, the book will disclose secret details of Jared Kushner’s Middle East peace plan. The plan will push Saudi Arabia to sign a peace treaty with Israel and to end the Arab League boycott while undercutting the Palestinian cause
I, Jared: The Trump Secrets will make a startling final revelation that promises to shake the Trump administration like no other.

You have subscribed to alerts for Anonymous.

You can also sign-up to receive email notifications whenever Anonymous releases a new book.