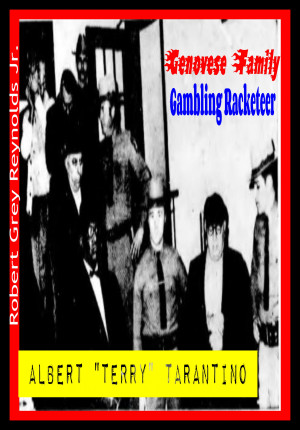 By Robert Grey Reynolds, Jr
Albert "Terry" Tarantino was arrested following an eight-month investigation led by an undercover investigator in New York. The probe effectively ended a gambling operation that netted $1 million annually for the mob. Identified only by his alias, Robert Shapiro, the district attorney prober, was chased out of town by organized crime operatives. A grand jury soon returned a 67-count indictment. More
Albert "Terry" Tarantino was a high-ranking Genovese crime family operative. Based in New Rochelle and Westchester County, New York, he was heavily involved in gambling. rackets. He was arrested in a large roundup of mobsters in 1969. However, the sting earned Tarantino only a light prison sentence. The betting racket was also tied to upper echelon Gambino soldiers and caporegimes. Tarantino's criminal career began in the 1930s when he was seized for his role in a Bronx robbery. Perhaps the first incident on his crime ledger was a December 3, 1931 arrest following a raid on a Pelham gambling room.