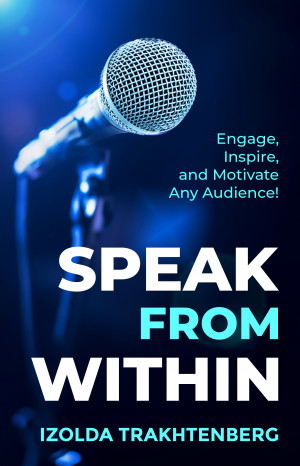 Speak From Within: Engage, Inspire, and Motivate Any Audience

Born in Moldova in the former Soviet Union, Izolda grew up steeped in the rich heritage of Eastern Europe. After her family immigrated to the USA, they settled in Michigan where Izolda graduated from the University of Michigan. Izolda worked as Director of Writing and Production for the public records research firm, The Information Prospector. Then, she proceeded to the National Geographic Society's Educational Media Division followed by a stint as an environmental educator for NASA. She has co-authored numerous scientific publications as well as written stories for various on-line magazines.

During this time, she pursued her musical interests. Izolda released her solo CD, Sound the Deep Waters in 2003.

She is an avid fantasy and science fiction fan, and she devours movies like they are pieces of dark chocolate.

She released her first book, "Life Elements: Transform Your Life with Earth, Air, Fire, and Water," in July 2008. Her second book was released in March 2011. The first in the Fairy Godmother Diaries series, "The Fiddler's Talisman" follows the adventures of badass fairy godmother, Evie Songbottom in modern-day New York. "The Piano's Key," the second book in the series, was released in April of 2016.

Izolda and her husband reside in Brooklyn, NY with their two cats, and a house full of musical instruments and juggling clubs.

Reviews of Speak From Within: Engage, Inspire, and Motivate Any Audience by Izolda Trakhtenberg

You can also sign-up to receive email notifications whenever Izolda Trakhtenberg releases a new book.