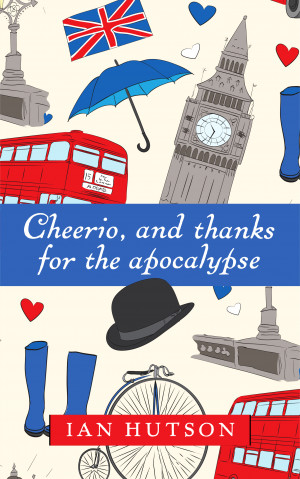 Cheerio, And Thanks For The Apocalypse

By Ian Hutson
Seven tales of England & the English Empire territories of Heaven and Hell collapsing and burning while the population sinks into insanity. Mix atomic annihilation with religion, politics and a nation on tranquilisers and you will surely get burned alive, eaten alive and denied a peaceful afterlife. Features strong male leads, political incorrectness, very little diversity, and a giggle or two. More
It’s not easy being a vegetarian ray of positivity and social sunshine after the apocalypse. For one thing, meat’s easier to come by than broccoli.

Seven awfully English tales of life just that one step too far into your future. I went there so that you wouldn’t have to.

Once upon a time you could rely on death and taxes, but now it’s only taxes. Old age is rotten, life never ends and croaking it, turning up your toes, putting on the wooden overcoat, assuming room temperature, shaking that last double-six and even, not to put too fine a point on it, pushing up the proverbial daisies isn’t the restful release that you hoped it would be. Your last best hope is England’s two finest “popular television scientists” and their dog, each being granted three wishes by a troglodyte genie from Lancashire. You won’t believe what the dog wished for. I believed it, but then, you see, I knew the dog in real life, so nothing surprises me anymore.

This book is a celebration of old-fashioned language and unsubtle entertainment. It features strong male leads and no diversity whatsoever. This book won’t enlighten you and it certainly won’t somehow “educate” you. If we’re lucky, you and I, it might just distract you for a couple of hours. Imagine your brain as being made of soft rubber, being let off the leash in the park and running around on the grass with other brains, peeing up trees, chasing balls and then throwing itself down at your feet, panting – that’s the best effect that either of us can hope for from Cheerio, and Thanks for the Apocalypse.

Seriously. This is a book for blokes. A very unserious book indeed.

You’ve got to laugh, haven’t you? Laugh and the whole world will give you the wide, wary berth you always dreamed of, wondering what you know that they don’t. Cry and they’ll be lining up to poke you with sticks. I recommend laughing

Born during tiffin in the sea-side town of Cleethorpes, England, in the year nineteen-sixty. The shame and scandal forced the family to move immediately to Hong Kong. There spoke only Cantonese and some pidgin English and was a complete brat. At the end of the sixties was to be found on the Isle of Lewis in the Outer Hebrides of Scotland. Still a brat. Finally learned to read and write under the strict disciplinarian regime of the Nicolson Institute and one Miss Crichton. Then spent a year living in Banham Zoo in Norfolk, swapping childhood imaginary friends for howler monkeys and gibbons. Literally in the zoo, to get home he had to go through the entry turnstiles, past the wolves, past the bears and past the penguins. Didn’t bother with the local school for the entire year, and school was grateful.

Found himself working for the English Civil Service. Was asked to leave by the Home Secretary’s secretary’s secretary’s secretary’s assistant. A few years of corporate life earned some more kind invitations to leave. Ran a few unfortunate companies. Went down the plug-hole with the global economy and found himself in court, bankrupt, with home, car and valuables auctioned off by H.M. Official Receivers. Lived for some years then by candlelight in a hedgerow in rural Lincolnshire as a peacenik vegan hippie drop-out. Now lives on a canal boat, narrowboat Cardinal Wolsey, rushing up and down England’s canals and rivers at slightly over two miles per hour. Wrestles with badgers.

Dog person not a cat person. Dogs and cats both know this.

You have subscribed to alerts for Ian Hutson.

You have been added to Ian Hutson's favorite list.

You can also sign-up to receive email notifications whenever Ian Hutson releases a new book.