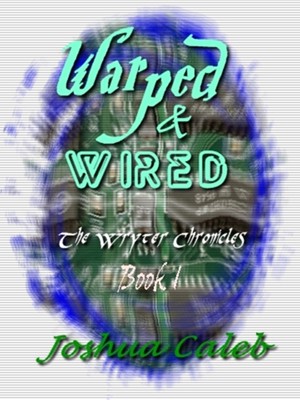 Warped & Wired trailer
My first "Warped & Wired" book trailer. Find out more at www.TheWryterChronicles.com, also thanks to YellowGold for the music in the trailer. www.YellowGoldMusic.com

Warped and Wired by Joshua Caleb is an enjoyable adventure novel, part sci-fi, part fantasy. You are not going to find any deep meaningful angst or heavy introspective character development, but you will find an amusing, delightful book full of sly humour, action and an intriguing premise.

The book follows the escapades of two girls: Portia, a magical Sky Wryter, and Mlina, who has a serious computer problem. They are on the hunt for Mlina’s father so he can shed light on the secret of both girls’ past. Complicating matters are Portia’s odd relatives and a malevolent Dark Wryter who wants both Mlina and her father for his own malicious purposes.

The book is breezy and an easy read, giving the reader a fast-pasted plot and engaging characters, nicely realized. The tone blends the conflict and peril with just the right amount of tongue-in-cheek wit and homage. I did think it faltered a bit in the emotional resolution; I found it somewhat rushed and shallow, with all the family threads tied up a bit hastily. Also, there were a few grammar gaffes here and there. Still, overall it is an entertaining book.

I wish I could explain how very much I wanted to like this book. It's a YA fantasy/sci-fi, with two female protagonists (one a teenaged human, one a "Wryter," a race of long-lived magic users -- this one is 42, but looks like a teen herself). Thrust together by circumstance, they need to go after a user of dark magic in order to foil certain plots.

Things went downhill quickly, though. We had plagiarism from Star Wars (with Uncle Vi'son, the wise, old being who speaks like Yoda), Disney (a red-haired mermaid named Arielle Aerielis, married to the human Prince Eric), and H.P. Lovecraft (when the bad guy transforms into a bat-winged, tentacle-faced, clawed demon).

That's to say nothing of the numerous grammar gaffes, such as your/you're confusion, "her and her mother," etc. The book would have strongly benefited from having an experienced editor review the manuscript before publication.

It's all very sad, because this could have been a really outstanding story if the author had stuck to his own ideas instead of just taking them from others.

You have subscribed to alerts for Joshua Caleb.

You have been added to Joshua Caleb's favorite list.

You can also sign-up to receive email notifications whenever Joshua Caleb releases a new book.