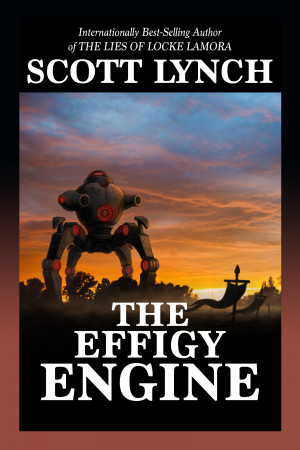 By Scott Lynch
The Iron Ring has come to conquer, with cannon and magic and a disciplined army of thousands. The Red Hats have been hired to stop them, with even stranger sorcery and an unorthodox, semi-disciplined force of... dozens. On a good day. Misfit mercenaries must face iron war machines in this action-packed black powder fantasy from internationally bestselling fantasist Scott Lynch. More
Meet the Honorable Company of Red Hats. Misfits, eccentrics, pranksters, nonconformists... and professional killers without peer. Mercenaries for hire in a war-torn world, the Red Hats always seem to end up fighting for sides that are more righteous than strong, for clients who are more desperate than wealthy, in circumstances that are more exciting than survivable.

In this excerpt from the chronicles of the Red Hats, as told by their self-appointed historian, the sorcerer called Watchdog, the company faces an armed and armored war machine that threatens to break an army of thousands and crush a free republic beneath its steel tread.

Originally published in 2013, "The Effigy Engine" is a black powder fantasy of magic, musketry, and mercenary banter.

Author of the internationally best-selling Gentleman Bastard sequence, Scott has been nominated for the World Fantasy Award, the Locus Award, the Campbell Award, and the Compton Crook Award. He received the British Fantasy Society Award for Best Newcomer in 2008.

Scott was born in 1978 in St. Paul, Minnesota, the first of three brothers. At various times he was a dishwasher, a waiter, a graphic designer, an office manager, a prep cook, and a freelancer/self-publisher in the gaming field, before accidentally selling his first novel in 2004.

After training at Anoka Technical College in Minnesota in 2005, Scott joined his local fire department in St. Croix County, Wisconsin and served as a paid-on-call firefighter for eleven years.

You have subscribed to alerts for Scott Lynch.

You have been added to Scott Lynch's favorite list.

You can also sign-up to receive email notifications whenever Scott Lynch releases a new book.