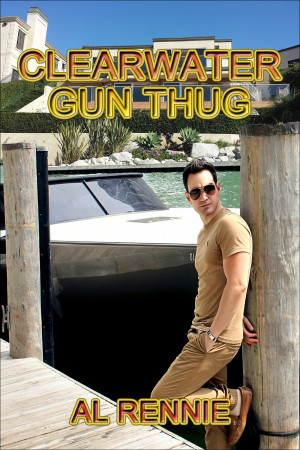 By Al Rennie
Rated 5.00/5 based on 1 reviews
Mia is away at a conference; the kids are at camp; Joe is 'batching' it; his free time is interrupted when a woman asks Joe to find her sister's killer just released on probation; but is this a trap set up to take Joe down? McAdoo complicates Joe’s asking that he do due diligence on his niece's fiancé; Morse's legal assistant is being stalked. So much for a peaceful weekend in paradise ...

Al Rennie's Clearwater series is the best! I am always so excited when a new one comes out. Clearwater Gun Thug is sightly different in the series, where the cast of characters are a bit different, but the story is still as intriguing, smart, funny, current, and mysterious as ever, The main Character, Joe Holiday shines more than ever in Clearwater Gun Thug. I still had no idea how this story was going to work itself out because Mr. Rennie is such a masterful story teller, that you know everything will work out in the end, but the cleverness of the way the story unfolds keeps you guessing until the end. I love this series and cannot help but read through it fast because the story keeps you on the edge of your seat, but then I reread it because I want to try to pick out any clues that I might have missed to see how the story came together. Thank you Mr. Rennie for always keeping us Clearwater fans entertained and for taking such good care of the people in this series who have become like friends to us. I am getting ready to reread all of the books in this series to keep me tied over until the next installment. I cannot recommend this series enough to anyone who loves a mystery mixed with comedy.

You have subscribed to alerts for Al Rennie.