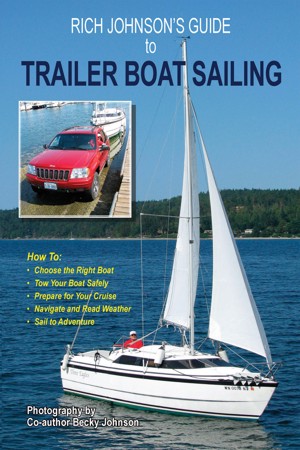 By Rich Johnson
Rated 5.00/5 based on 1 review
A trailerable sailboat is the ideal way to explore the country -- wherever there is water. To make the most of this exciting lifestyle, owners of trailerable sailboats need three things -- an understanding of the boat and how to use it; knowledge about the tow vehicle and trailer used to transport the boat; and a spirited sense of adventure to live the dream. This book will help you get started.
Available ebook formats: epub mobi pdf rtf lrf pdb txt html
First 10% Sample: epub mobi (Kindle) lrf more Online Reader
pdb
Price: $7.99 USD
Buy Add to Library Give as a Gift
How gifting works
Create Widget
Tags: sailing cruising sailboat trailerable sailboat rich johnsons guide
About Rich Johnson

Rich Johnson was born and raised in a tiny northern Utah town, where he learned to fish and hunt under the tutelage of his dad and grandfather. As a kid, he spent time on the far end of a two-man crosscut saw, learned to split wood for the winter stove, hunted grasshoppers in his grandma’s garden for a nickel a pop bottle full, and had a dog named Tippy. Life was good.

After a stint in the Army Special Forces, Rich ended up in Los Angeles, working in the magazine industry as a writer, photographer and editor. During his 33-year career, he’s written hundreds of articles and several books. His travels took him all around the country and to far-flung parts of the world. He now lives in the Pacific Northwest.

Rich enjoys sailing, scuba diving, fishing, camping, rock climbing, kayaking, golf, backcountry skiing and just about anything else that can be done outdoors. He has more than 30 parachute jumps to his credit, rappelled from helicopters, and holds a Frequent Faller card as a bungee jumper.

Rich served as a volunteer firefighter and emergency medical technician.
~~~~
Becky Johnson is a freelance writer and photographer whose work has appeared in travel and outdoor magazines for more than twenty years. She’s been featured in such publications as Lifestyles, Trailer Life Magazine, MotorHome Magazine, Four Wheeler Magazine, Holidays, and others. Her columns Becky’s Corner, The Better Half, and People Going Places highlighted women’s issues, the lighter side of life, and travel and adventure. She also worked as a copy editor and managing editor.

Becky and her husband Rich live in Washington State and have shared many adventures together — including a year-long wilderness project that involved living in a cave. Today, they enjoy traveling the country with their trailerable sailboat Three Eagles. From their home office, they work together doing research and photography for their books and magazine projects.

Great book for new owners of the Macgregor 26

You have subscribed to alerts for Rich Johnson.

You have been added to Rich Johnson's favorite list.

You can also sign-up to receive email notifications whenever Rich Johnson releases a new book.