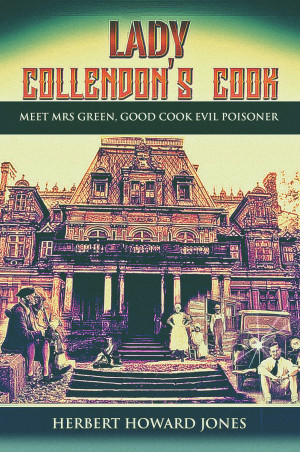 Rated 5.00/5 based on 3 reviews
As a cook working for Lady Collendon, Jewish Mrs Green is accused of poisoning a Nazi diner. But was this allegation based on fact? Or was she the victim of a political plot devised by a British civil servant who has a lot to gain from her downfall? There were many questions and few answers, but perhaps a humble man's love will save her from the hangman's noose! More
MEET MRS GREEN - GOOD COOK, EVIL POISONER

When Mrs Green entered domestic service as a cook in the 1930s for the gracious Lady Collendon at her stately home in the glorious English countryside, she had no idea she was going to end up as a convicted criminal.

Anyone who personally knew Mrs Green was convinced she was innocent. But when a German diplomat dropped down dead after attending a dinner party she'd cooked for, suspicions were raised. The fact that she had a Jewish background counted against her. It raised the serious question as to whether she had poisoned the guest deliberately!

It was now a time of political tensions in Europe and the authorities were quick to act. Under pressure from a belligerent Nazi Germany, a conniving British politician leads the way. He has to either prosecute Mrs Green or risk offending the Germans and starting a war!

Unfortunately, there were just too many powerful people ranged against her. A miscarriage of justice and a guilty verdict seals her fate.

But somehow, she will have to find a way out of her terrible predicament. Fortunately, she had the love and admiration of a humble man who was determined to help her. Although, three questions still remained: What was the butler up to? Was Mrs Green really as innocent as she claimed to be? And who was the mysterious person she kept writing to?

HERBERT HOWARD JONES grew up in Notting Hill, London in the sixties. He went to a boarding school in Norfolk and then local schools including Sloane School where crime writer John Creasy attended near the King's Road. When he left school he got numerous jobs, including as a porter at the BBC London, working as a jewellery assembler in a factory in Hatton Garden and also in a number of roles at a showbiz solicitor's office where he was a trainee legal executive and ran errands for a few of the British movie and music names of the time.

He is a creative spirit who also likes dabbling in music and art himself. When he was in the jewellery business he personally made over ten thousand 14 carat gold gate bracelets which was a great learning experience for him. However, he was more interested in media and always wanted to write suspense books with a melodramatic element and so spent years reading them and working on various projects. He is also interested in romantic and fantasy fiction.

But meeting people has always inspired him the most and he has had the good fortune to meet quite a few interesting people. He was personally friends with horror writer, Denis Wheatley's housekeeper when she lived in Blackheath, and knew poet John Pudney who lived nearby before he passed. One of the most interesting people that he met was the daughter of the Captain of the Titanic with whom he had tea in her cottage up in Suffolk. Miss Smith was a lady with a big personality and a very interesting home. She was surrounded with Titanic memorabilia wherever you looked. Jones was only a boy at the time and didn't appreciate the significance of all this stuff, but regrets not quizzing her on the catastrophic event which has forever featured large in shipping folklore!

I WANT TO EXPRESS my gratitude to readers who have bothered to download my books. I put a lot of effort into them and also design my own covers, and so it is a wonderful reward to get a download. Every author on this platform will be grateful for them because writing can be a lonely and thankless task. It is only the reader who makes it all worth while, and so thanks very much again.
HHJ

Lady Collendon’s Cook transports the reader, not to a simpler time, but a time of consequence. The characters and plot weave through prewar, post Victorian Britain in an engaging manner without resorting to the current predilection toward morality plays and predetermined viewpoints.

Mrs. Green plays well as the not-so-ordinary everyman (or woman as it may be) and the intrepid Mr. Kearns keeps life interesting for all. The Nazis play second fiddle to the craven British aristocrats as villains in a manner that reminds a new generation that many in the UK (and the US, for that matter) were more than sympathetic towards the resurgent Germany.

With a believable cast, and a nostalgic air, Mrs. Collendon’s Cook provides an engaging, if somewhat ahistorical, look at a period that is quickly fading from memory.

Brew up a pot of tea and let Lady Collendon’s Cook take you back to the pre-World War II days of upper-class England.

Fans of Remains of the Day will enjoy this suspenseful story that starts out in a stately home that entertains both English aristocrats and German diplomats. But when a German diplomat staying in Lord and Lady Collendon’s home orders some wurst and shortly thereafter, dies in his room, tainted pork is one of the possible causes. Is it an assassination attempt? Interested parties may not believe it is but it is politically convenient to pursue the possibility. Naturally, Lady Collendon’s cook becomes a person of interest. We get introduced to a variety of characters who we might be tempted to think of as ordinary people caught up in extraordinary circumstances. But as the story unfolds, Herbert Howard Jones shows us that these people aren’t so ordinary.

Herbert Howard Jones has set his story in a fascinating time in English history. After World War II, it was conveniently forgotten that there had been Nazi sympathizers in Britain among both the lower and upper classes. But thanks to movies and novels like Remains of the Day and Lady Collendon’s Cook more people than ever know that history can be a terrifying reminder that we don’t see what’s coming even when all the signs are in place.

The great appeal of Jones’ book, however, is that despite the vivid backdrop, when you’re done reading it, it’s the individual characters who you will remember, and not just Lady Collendon’s cook!

You have subscribed to alerts for Herbert Howard Jones.

You have been added to Herbert Howard Jones's favorite list.

You can also sign-up to receive email notifications whenever Herbert Howard Jones releases a new book.