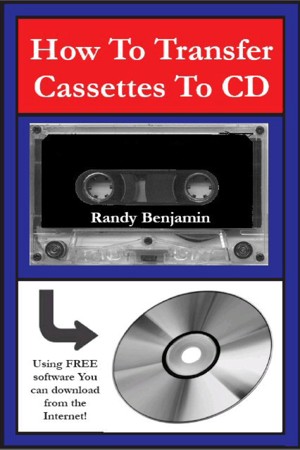 How to Transfer Cassettes To CD

By Randy Benjamin
Everything you need to know to make quality reproductions is in this book. Things such as, selecting the right dubbing cables, input and out put jacks, stereo to mono adapters, "Y" adapters and how to hook them up.

I'll show you where to find dubbing cables (Radio Shack) including the catalog numbers and prices.

Randy Benjamin has been a computer technician for over 35 years. Before that he was in the music business recording for several major labels. (Warner Bros, Curb, and Mercury Records) He also owned and was the recoding engineer at Castle Recordings a small recording studio in the heart of “music row” in Nashville Tennessee.

In 1995, he started freelance writing, selling his first articles to Music Row Magazine in Nashville. These articles documented the increasing use of computers in the recording, mastering, and distribution of 'hit' records. They also helped to show just how important a roll the emerging Internet would play in the ever-changing cycles of boom and bust that's always been a part of the music industry.

In 1998 he started a newspaper column that was syndicated in 23 newspapers. This column inspired his first two books, “The Internet Guide Handbook” and “More of the Internet Guide.” Soon to follow was an interactive CD called, “The Healthy Computer.”

In late 2009 he went back to his musical roots writing and producing a children’s Album and book called, “Tapestries.” After demoing the album in Nashville, he decided that a one hour animated television special might be a possibility so he’s planning on pitching the idea to Warner Bros, Disney, and Hanna Barbara sometime in 2010.

2009 was a busy year. Writing under the pen name of Asher Dan, he tested the market with a sci-fi novel called, “The Anomaly.” He’s since decided to go ahead and release it under his own name, doing away with the pen name altogether. This novel should be ready for release in the summer or fall of 2010. In all, he has seven books, one album/book and one album in his catalog. Several of them will be carried on Smashwords.

Reviews of How to Transfer Cassettes To CD by Randy Benjamin

You have subscribed to alerts for Randy Benjamin.

You have been added to Randy Benjamin's favorite list.

You can also sign-up to receive email notifications whenever Randy Benjamin releases a new book.