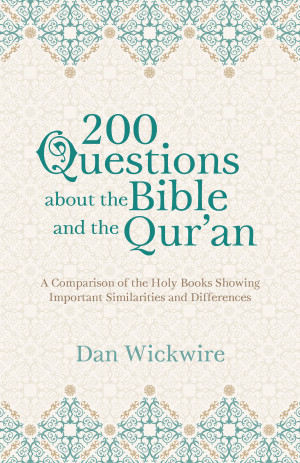 200 Questions about the Bible and the Qur'an: A Comparison of the Holy Books Showing Important Similarities and Differences

200 Questions about the Bible and the Qur'an answers questions such as these:
Is it accepted that the Holy Bible is the Word of God? (Tevrat, Zebur & Injil)
Does God want to protect all of His Holy Books from change and corruption? (Purpose /Niyet)
Are the “God” of the Bible and the “Allah” of the Qur’an one and the same entity?
In the Holy Books when God refers to Himself, does He ever speak in the first person plural “We”?
Does God look on believers as being merely His slaves or servants?
Is the Holy Spirit accepted as God?
Is it accepted that Christ is the one and only mediator between God and man?
Is it accepted that Christ is alive today and that he will come again?
Is Muhammad’s self-proclamation of being a prophet a valid test or proof of prophethood?
Does a holy God take small sins seriously?
Is a person’s salvation contingent upon their own good works? (Ameller)
Will everyone have to spend a period of time suffering in hell?
Are women required to wear a veil outside the home?
Did God create people in His own image and likeness?
Did God promise the land of Palestine specifically to the Jews?
Download: epub
Price: Free! USD
Add to Library
Create Widget
Tags: allah koran hadith prophet muhammad islamic books the holy quran quran bible the study quran
About Dan Wickwire

Dan Wickwire was born in California in 1951 and grew up in the city of Bakersfield. His military service included three years in the U.S. army, during which he was trained as a medic, a paratrooper, and a Green Beret. He served a tour of duty as a combat medic in Vietnam.

Dan is married to Devri and is the father of three sons: Derek Yekta, Andrew Nadir, and Peter Can. He is an ordained minister who has served as a church planting missionary in Turkey for twenty-eight years. Dan and Devri currently reside in the Turkish Republic of Northern Cyprus.

You have subscribed to alerts for Dan Wickwire.

You have been added to Dan Wickwire's favorite list.

You can also sign-up to receive email notifications whenever Dan Wickwire releases a new book.