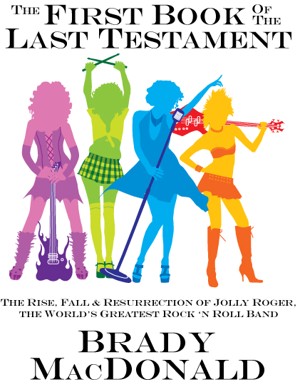 The First Book of the Last Testament - The Rise, Fall and Rebirth of Jolly Roger, the World's Greatest Rock n' Roll Band

By Brady MacDonald
Told through the eyes of lead singer Dominic "Domi" DeVille, the son of God raised as the Devil’s child, the bandography tells the story of a DIY indie band desperate to become rock gods.

Faced with a Faustian bargain, will they choose the Stairway to Heaven or the Highway to Hell?

Brady MacDonald moved to California in 1989 determined to become a rock star. It was the exhaust fumes of the MTV hair metal era and McMac’s dream of becoming the next David Lee Roth, Jim Morrison or Robert Plant never happened. Nirvana did. And MacDonald turned to his back-up career: journalism.

Today he is an award-winning journalist at the Los Angeles Times with a unique specialty. As a graphics reporter, MacDonald is a visual storyteller and information architect who blends words and pictures to illustrate and explain the news.

He’s covered the biggest stories of the day – the Iraq war, Hurricane Katrina, the Southeast Asian tsunami, the relaunch of the Space Shuttle and the Michael Jackson trial. On the lighter side, he’s put readers in the driver’s seat of an Olympic bobsled, on the flight deck of an aircraft carrier and backstage at the Oscars.

When his daughter was born nine years ago, he kept a journal of his raw and honest thoughts and feelings during her first year. “Owner’s Manual” turned into a parenting guide for first-time fathers – documenting the stressful and rewarding changes wrought by a new baby on a marriage and a life.

As a warm-up to his first novel, he wrote a screenplay – a coming-of-age romantic comedy about a May-November relationship. “Cook in the Kitchen” grew out of his relationship with an older woman during the summer between high school and college.

A decade or so after switching from rocking to reporting, McMac wondered: “What if I’d realized all my dreams and become a rock star?” From that daydream evolved his first novel, “The First Book of the Last Testament.

He is currently working on his next novel, based on the Biblical book of Esther, about a family feud between quarreling casino magnates set in 1950s Las Vegas.

You have subscribed to alerts for Brady MacDonald.

You have been added to Brady MacDonald's favorite list.

You can also sign-up to receive email notifications whenever Brady MacDonald releases a new book.