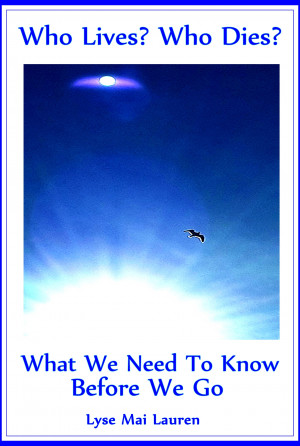 Who Lives? Who Dies? What We Need to Know Before We Go

By Lyse Mai Lauren
Sooner or later we might find ourselves suddenly wondering; Who Dies? If this happens then we may quickly find another question arises in our minds; if one is to 'die' then who is it that lives? We cannot have one without the other. Getting to the root of these most vital of questions is of the utmost importance to us all. More
There comes a time in most people’s lives when a question suddenly arises. Who am I? This question might give rise to other questions, such as; Who Lives? or Who Dies? Essentially they all amount to the same thing. We cannot die unless we are alive. There is a profound mystery at the core of our existence and yet because this is something so close to us we usually just overlook it. This book is about taking the time to notice, taking the time to ask the right questions. If there is something which is of the utmost importance to each and every one of us it is getting to the root of these most important questions, now, while we live...

Lyse Lauren grew up in Nelson, New Zealand as the third of four children. Her 'known' world was abruptly shaken when she had a brief but profound spiritual experience as a child. Just a few years later she was 'challenged' yet again when dragged out to sea by ocean currents and almost drowned. These two events were the catalyst for a pronounced intention to discover the 'meaning of life.'
Driven by this deep inner longing, she travelled to Australia and eventually to Tibet, Nepal and then India, where she met her Master, a Tibetan Lama of high standing. In his presence she was able to rediscover what she had glimpsed as a child. Over a period of several decades she has lived near her teachers in various locations in the Himalayas.

You have subscribed to alerts for Lyse Mai Lauren.

You have been added to Lyse Mai Lauren's favorite list.

You can also sign-up to receive email notifications whenever Lyse Mai Lauren releases a new book.