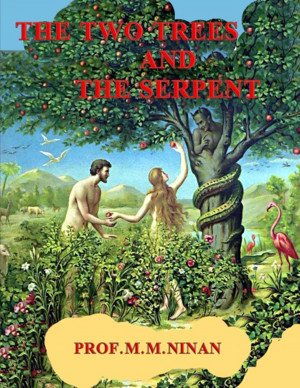 The Two Trees and the Serpent

By M.M. Ninan
In this book we are dealing essentially with the presence of the serpent in the Garden of Eden and placed the newly created Adam and Eve with two strange trees For some strange reason the serpent who was one of the residents got involved. Why was the forbidden tree and the evil serpent in the garden? More
This is a study of the first few chapters of Genesis where the Garden of Eden in which the first humans Adam and Eve were placed. There were two trees - the tree of the Knowledge of Good and Evil and the tree of Life. Adam and Eve were placed with one law - not to eat of the Tree of Knowledge. Then why was it there. There was also a serpent which drives man to eat of the fruit of the tree of knowledge. Why was the serpent there. This story is interpreted in terms of the Jewish cosmological understanding and Jewish mysticism.

Prof. Ninan was born in Kozhencheri, Kerala, India in a Syrian Christian Family which claims descent from one of the four families to whom St.Thomas the apostle of Jesus entrusted the gospel. His father Late.M.M.Mammen, was a publisher Freedom fighter and Christian Reformer. His eldest Brother is the well known theologian Late Dr.M.M.Thomas, who was the Chairman of the World Council of Churches, the Governor of Nagaland, India and the Chairman of the Christian Institute of Study of Society and Religion. He belongs to the Malankara Mar Thoma Church, a reformed church holding the theology of the Eastern Churches which claims a 2000 year old heritage.

He is by profession a Professor of Theoretical Physics and had been a teacher in various universities around world including Ethiopia, Ghana, Jamaica, Sudan, Yemen, India and United States of America. He retired as the President of the Hindustan Academy of Engineering and Applied Sciences, Affiliated to University of Bangalore, India
He was the first Moderator of the International Christian Fellowship, Sanaa, Yemen and the Co-founder, Sudan Pentecostal Church. He has published several studies on the influence of Christianity in the formation of Hindu religion and religious scriptures.

You have subscribed to alerts for M.M. Ninan.

You have been added to M.M. Ninan's favorite list.

You can also sign-up to receive email notifications whenever M.M. Ninan releases a new book.