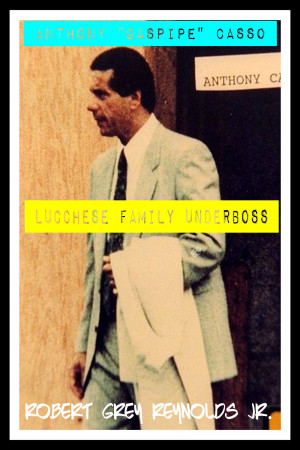 By Robert Grey Reynolds, Jr
Anthony "Gaspipe" Casso was implicated in the August 10, 1989 murders of two East Northport, New York garbage carters. The victims, Robert Kubecka and Donald Barstow, were killed in their business offices on the morning of August 10th. The case resulted in a significant reward of compensation to the murdered men's families. As informants Kubecka and Barstow were supposed to have been protected. More
Anthony Salvatore "Gaspipe" Casso was a significant caporegime and underboss in the Lucchese family organization. My e-book looks at his criminal career from a parole bribery scheme that was penetrated in 1974. The ruse was operative at Rikers Island prison in Yorktown, New York. Casso later turned government informant, providing essential information about his former Lucchese associates. Casso was given the nickname Gaspipe at a young age, while he was working on the docks in Brooklyn. He was a close friend of Christopher "Christie Tick" Furnari and Vittorio Victor Amuso.