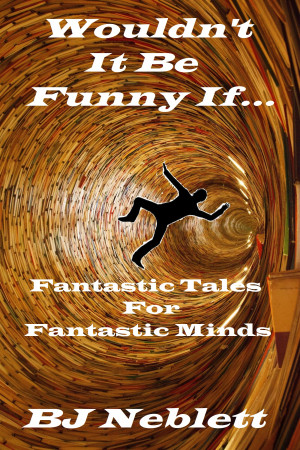 By BJ Neblett
Stephen King once commented, “First I ask myself, ‘Wouldn’t it be funny if…’.” In this collection, award winning author BJ Neblett takes King’s advice to heart and well beyond with 15 tales of Fantastic Literature. From a teen’s spell casting cell phone, to a mother’s premonition, to a haunted laptop, Neblett, “throws open forbidden doors to alternate realities best not visited." More
What if a cell phone could do your bidding for you? What if a laptop had feelings? What if an actor were to give the performance of his life… literally? These are just a few of the possibilities as popular author BJ Neblett tears open the doors to some alternate realities and peeks inside. Doors that probably should remain nailed tightly shut. This collection of Fantastic Literature brings together a man destined to fight our wars; a spirit that refuses to leave his best friend’s side; an inmate facing unseen fears; a man on the brink of suicide; and a musical instrument straight out of Freud’s nightmares. If you’ve ever rooted on your favorite sports team, gotten lost in the dark, or longed to write the next best seller, and wished for an easier way, then read on. This collection is for you. Only take a tip from Roger Martin, the hero of It’s Only A Game and be careful what you wish. In some realities anything can be possible when you dare to ask, “Wouldn’t it be funny if…"
Available ebook formats: epub mobi pdf lrf pdb txt html
First 12% Sample: epub mobi (Kindle) lrf more Online Reader
pdb
Price: $3.99 USD
Buy Add to Library Give as a Gift
How gifting works
Create Widget
Tags: fiction horror fantasy short stories young adult suspence contemporary fantasy scifi fiction bj neblett fantastic literature
About BJ Neblett

At an early age, BJ Neblett discovered irony, an irony that seemed to escape those around him. And so BJ wrote. Trying to make some sense of the world, BJ wrote. Starting with simple compositions in grade school, he quickly moved on to short stories. With Ray Bradbury and the Twilight Zone and Saturday afternoon matinees as his mentors, BJ wrote about space and friendly aliens and not so friendly things that go bump in the night. Upon discovering the opposite sex, BJ did what any smitten young man would do, he began to write poetry, his work appearing in a national anthology while he was still in high school. Be it poetry or short stories; fantasy or sci-fi; gritty fiction or touching reality, irony and thought-provoking themes soon became the hallmark of BJ’s work.
Following service in the army during the Vietnam war, BJ fulfilled his childhood dream. Embarking on a thirty-year odyssey, he built a career across the US as popular radio DJ Billy James. With pen firmly in hand, and a keen eye to the ever-changing world around him, BJ honed his writing skills on radio scripts and commercial copy. During this time, BJ’s stories began finding readers in several magazines and fiction anthologies.
BJ’s first full novel, Elysian Dreams: Where The Past Meets The Present was released to rave critical reviews, his writing being compared to that of Isaac Asimov and Haruki Murakami. The urban contemporary fantasy quickly became a favorite among readers of sci-fi and literary fiction alike.
Not to stand on laurels, BJ followed up with something closer to home. Ice Cream Camelot has been hailed as a must-read historical memoir, guiding the reader though the turbulent, corybantic ‘60’s as seen through the eyes of shy, confused, maturing young boy. BJ claims the very personal work was something that, “…needed to come out,” and, “…very therapeutic in writing.” BJ’s powerful and touching memoir has been call the ‘50’s and ‘60’s version of The Catcher In The Rye.
BJ continues to write short stories for numerous print and on-line romance and fiction magazines. With Planet Alt-Sete-Nine, The Lost Princess, BJ has returned to his first and true love. This exciting series promises more of the contemporary fantasy thrills, romance and page turning, alternate reality action readers have come to expect. And of course, more of BJ’s trademark irony.
Today, BJ splits his time between teaching writing at Seattle’s famed Hugo House for Writers and speaking on the writing process at the library. When he’s not on the mound pitching softball, BJ can be found in his cozy apartment surrounded by scores of vintage vinyl records; a collection of classic guitars, and a seemingly endless pile of pages of chapters, notes and ideas for his next book, short story or poem.

Reviews of Wouldn't It Be Funny If... by BJ Neblett

You have subscribed to alerts for BJ Neblett.

You have been added to BJ Neblett's favorite list.

You can also sign-up to receive email notifications whenever BJ Neblett releases a new book.