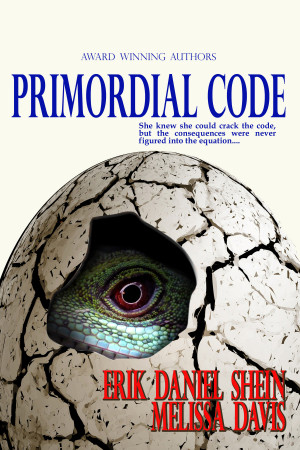 Sam’s world seems complete, until one life-altering accident bumps it off its axis, sending her into a tailspin she cannot control. When her best friend Charlie is in a coma, Sam feels the only way to bring him back is to create the one thing he dreamed of seeing his entire life, a living breathing dinosaur. She spends every waking hour, creating a virtual reality program that will help her manipulate the genetic code trapped within the rocks that contain the primordial DNA. The DNA of the triceratops they found has been preserved far beneath the earth.

She knew she could crack the code, but the consequences were never figured into the equation….

Sam is catapulted into mass chaos as helicopters fly over her house and she finds that everything she thought was true is tarnished in deception. The consequences of her actions have them fleeing for their lives….

Erik Daniel Shein was born Erik Daniel Stoops, November 18th 1966. He is an American writer, and Visionary, film producer, screenwriter, voice actor, animator, entrepreneur, entertainer, and philanthropist, Pet enthusiast and animal health advocate. He is the author and co-authored of over 30 nonfiction and fiction books whose writings include six scientific articles in the field of herpetology. His children’s book, “The Forgotten Ornament” is a Christmas classic, and was endorsed by Hollywood legends Mickey and Jan Rooney.

You have subscribed to alerts for Erik Daniel Shein.

You have been added to Erik Daniel Shein's favorite list.

You can also sign-up to receive email notifications whenever Erik Daniel Shein releases a new book.