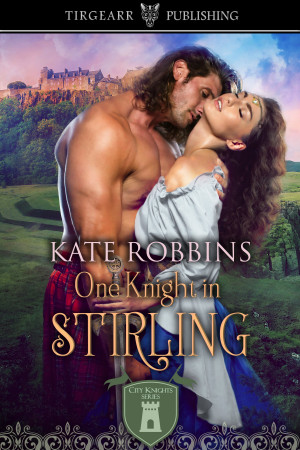 One Knight in Stirling

Kate Robbins writes historical romance novels out of pure escapism and a love for all things Scottish, not to mention a life-long enjoyment of reading romance. Her journey into storytelling began with a short screenplay she wrote, directed, and produced which was screened at the 2003 Nickel Film Festival in St. John’s, Newfoundland. She has also written and directed several stage plays for youth.

Kate loves the research process and delving into secondary sources in order to give readers the most authentic historical romance possible. She has travelled to Scotland and has visited the sites described in her Highland Chiefs series.

Bound to the Highlander is the first of three books set during the early fifteenth century during the reign of James Stewart, first of his name.

Kate is the pen name of Debbie Robbins who lives in St. John’s, Newfoundland, Canada with her hubby, the man-beast, and her two awesome boys, the man-cubs.

About the Series: City Knights

One night with one knight in a historical setting.

Reviews of One Knight in Stirling by Kate Robbins

You have subscribed to alerts for Kate Robbins.

You have been added to Kate Robbins's favorite list.

You can also sign-up to receive email notifications whenever Kate Robbins releases a new book.