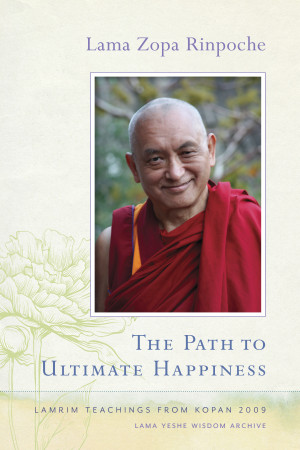 The Path to Ultimate Happiness

Lama Zopa Rinpoche is a Tibetan Buddhist scholar and meditator who for 30 years has overseen the spiritual activities of the worldwide network of 160-plus centers, projects and social services that form the Foundation for the Preservation of the Mahayana Tradition (FPMT) which he founded with Lama Thubten Yeshe.

Born in the Mount Everest region of Thami in 1946, Rinpoche was recognized soon afterwards by His Holiness Tulshig Rinpoche and five other lamas as the reincarnation of the great yogi Kunsang Yeshe. Rinpoche was taken under the care of FPMT’s founder Lama Thubten Yeshe, soon after leaving Tibet, in Buxa Duar, India, in the early 1960′s. Rinpoche was with Lama Yeshe until 1984 when Lama Yeshe passed away and Lama Zopa Rinpoche took over as spiritual guide of FPMT.

You have subscribed to alerts for Lama Zopa Rinpoche.

You have been added to Lama Zopa Rinpoche's favorite list.

You can also sign-up to receive email notifications whenever Lama Zopa Rinpoche releases a new book.