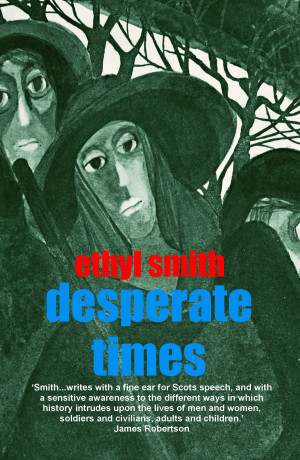 By Ethyl Smith
Desperate Times is the third historical novel in Ethyl Smith’s series, following Changed Times and Dark Times, about the lives of ordinary Scottish people in extraordinary times. More
July 1680: Richard Cameron is dead, and John Steel and Lucas Brotherstone have only just escaped capture by government forces.

The net widens to arrest anyone suspected of Covenanter sympathies, and the army becomes ever more brutal in its suppression of the rebels.

To have any hope of survival Lucas Brotherstone must escape to Holland, and John Steel is determined to make this happen.

Desperate Times is the third historical novel in Ethyl Smith’s series, following Changed Times and Dark Times, about the lives of ordinary
people in extraordinary times.

Ethyl followed a carreer in illustrating and design lecturing, before following an interest in holistic therapy & hypnotherapy, which she now teaches.

Her interest in Scottish language and history, particularly 17th century, led to a trilogy based on covenanting times, where greed, power, and religion created a dangerous mix. Changed Times is the first in that series.

You have subscribed to alerts for Ethyl Smith.

You have been added to Ethyl Smith's favorite list.

You can also sign-up to receive email notifications whenever Ethyl Smith releases a new book.