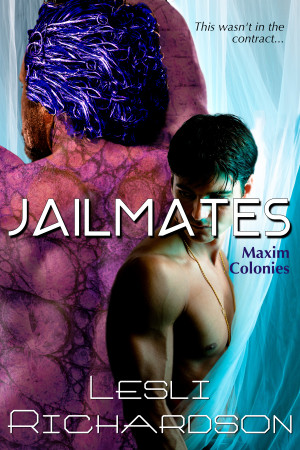 This wasn’t in the contract.

Simon Quigley had no idea what to expect when he agreed to do this for the money, but the seven-foot-tall pink alien isn’t what he was expecting. For starters, Simon’s straight.

And Mohrn isn’t a girl.

Lesli Richardson, better known by her Tymber Dalton pen name, lives in the Tampa Bay area with her husband and too many pets.

About the Series: Maxim Colonies

A sci-fi series for adventurous adults, with aliens who look like aliens, and the humans who love them.

Reviews of Jailmates by Lesli Richardson

Review
hopelesswillwin reviewed on Dec. 5, 2020
(no rating)
I have no idea what to rate this.
It was totally unexpected and very different from what title, cover and description make you believe. I loved it to pieces - except the constant and flippant misgendering of the love interest made this harmful and a huge disappointment.

Content warnings include: near constant misgendering that is acknowledged repeatedly yet almost always brushed away with "whatever", cis- and binary-normativity, imprionment, group sex, sex on- and off-page, contractual sex and a lot of invasive and body altering surgical procedures (consensual), what boils down to "mail order bride" system, fraud, egg-laying and what could be called alien-based and surgically implemented mpreg; mentions of death of parent, death threats.

The plot follows Simon, who after finishing his 5 year contract with the military wants a cushy job to provide for his mother and sister and fund their educations. Instead of this being a story about him being scammed into a sordid contract, there is a lot of details about the scientifical research and the legal and ethical contract behind it. A good third of the book is spent on Simon rethinking his options, and him talking with the doctor facilitating the contract - who also spends a considerable amount of time telling Simon to read the entire contract, which Simon does not do.

This was already unexpected, but delighted me, and the surprises continued when Simon met Mohrn, the alien he is contractually obligated to sleep with regularly. Their relationship was lovely and loving from the start, which a certain love-at-first-sight element to it, but this really is one of the times I truly wasn't bothered by that. Despite Mohrn and Simon spending a lot of time apart, it was never boring and very sweet.

What I truly hated however was the constant misgendering. When Simon first sees a picture of Mohrn, he for some reason assumes Mohrn to be female. No idea why. He quickly is informed that the Pfahrn, the alien species Mohrn belongs to, do not have genders and all use the pronouns phey/phem/pheir. Here came the first detail that made me wince. These alien have a specific set of (to us) neopronouns, but are still mostly referred to with they/them pronouns for some reason.
But even after being told this, Simon keeps talking aboiut Mohrn using she/her. When he meets Mohrn and realized phey have a penis, this switches to he/him.
What made this even more infuriating was that Simon does correct himself in his flow of consciousness and direct speech. But Every. Single. Correction. is followed up by a "whatever". This is so flippant and disrespectful it made me fume every single time.
Simon even talks to Mohrn and apologises for not getting pronouns right, yet doesn't seem to make any effort to correct himself. He keeps asking the reader to "cut him some slack", and insinuates that it's the aliens that are weird and he as a human (who are a "binary species") can't be expected to think this is normal.
As a nonbinary trans reader, I found this othering and hated every instance of this, and there were A LOT.
What made this even more infuriating was that Simon aside, none the aliens have problems with the pronouns. And after Simon and Mohrn's realtionship goes a step further, Simon suddenly has no issues using they/them, and after a year passes he consistenly uses phey/phem correctly. So it's not even an issue of not understanding how (neo-)pronouns work. This was willfully implemented as part of the story.
Additionally, the author clearly has not spent a single thought to the existence of trans people, be it binary or nonbinary. Humans are assumed to be stricly binary, and at some points gender and sexual indentity are confused.

I am so annoyed by this, because if not for this constant and deliberate misgendering this could have become a new favourite. As it was this felt too transphobic to me. Sure, misgendering happens, but this is a book. It was edited. The misgendering was deliberately included and continuously brushed off as "whatever".

I wanted to talk more about the plot and some of the more delightful and (positive) unexpected things in this book, but after revisiting all the misgendering and talking about it I no longer want to. I already get misgendered regularly in my life, and regularly have to misgender myself to keep myself save. I don't need to read about this in what's supposed to be escapism.

You have subscribed to alerts for Lesli Richardson.

You have been added to Lesli Richardson's favorite list.

You can also sign-up to receive email notifications whenever Lesli Richardson releases a new book.