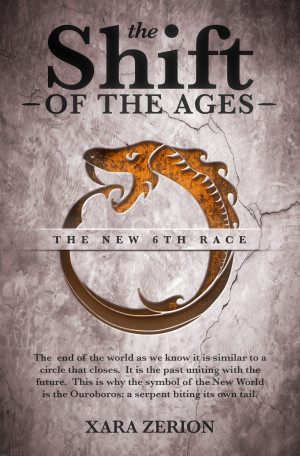 The Shift Of The Ages: The New 6th Race

By Xara Zerion
The New World we are moving into is internal and external - an extraordinary Parallel Reality which is visionary or spiritual as well as physical and geographic. It's another way of existing in another dimension which is here, in this same old world, only it vibrates beyond the reach of our five senses. More
The global healing and awakening of our Earth signs the passage from a life based upon separation, fear and fighting, to one based upon unity, peace, and love. Jesus referred to this process when he said: The humble will inherit the land.

The evolutionary progression unfolding at the present moment is manifesting itself through a rapid acceleration of the events in all fields: environmental (natural disasters), social (wars, terrorist attacks, economic crises, etc.) and individual (sphere of the emotions); it is a period of great unbalance, which precedes a new balance. Our “Fathers” say that it will end shortly. It is in full acceleration at the present moment and, because of this, we are living in a period of transition between two worlds where everything in life seems to move at an incredible speed, a phenomenon which is under everyone’s eyes and whose side-effects are: tiredness, anguish, unease, insomnia, panic attacks, feeling lost, etc. …

To be unaware of the nature of this process can be very frightening, whereas to understand its beauty and profound meaning enables us not only to walk through it safely but also to experience it fully.

This book contains a vital energy which you can perceive simply by reading it. It can help you to remember something about your past, something that is very, very ancient.

I was born a medium, but it was only at the age of thirty-five that I entered in a permanent fusion with my Third Eye. During childhood, I developed a deep fear of darkness as my psychic vision would open spontaneously in the middle of the night, exposing me to disturbing contacts with ghosts and spirits of the dead. Like many, I grew up in an environment that could not support this gift which, at the time, I perceived as a curse. Having to deal with the fear and anxiety caused by Nyctophobia soon brought me to develop yet another ailment. At the age of fifteen I became anorexic and was sick for twenty-five long, long years.
It was only many decades later that I met Lino Sambuco, a talented Yoga Teacher/Bioenergetics Therapist who, with the help of some Yoga exercises for the eyes and bioenergetic breathing techniques, taught me to ground myself and control when and how to open myself to the invisible world. That’s all it took for the anorexia to vanish – together with my fear of darkness!
In the years to come, I began a long journey across my homeland, Italy, which has been one spiritual adventure after another of teaching and learning with various remarkable Spiritual Teachers: Shantaam Dheeraj at the Global Village in Tuscany, Dr. Angela Azzaro at Aspic Counselling Centre in Modena, Carla Melchiorri and Noelle Perez-Christiaens at ISA – Modena, his eminence Lama Ganchen Rimpoche, and many others. It was through their teachings and initiations that I began to open a channel of communication with enlightened beings originating from a Parallel World which is millions, if not billions of years ahead in time from us. They presented Themselves as our “Fathers” – the Gods of Mankind. No words can describe how fortunate and blessed I feel to have received so much love and knowledge from These fabulous beings. I wrote and painted so much about life on the other side that, in 2011, I wrote in Italian and published a fully illustrated book called "Il Salto Vibrazionale - 2012?". I then translated it into English and updated it to the current Ebook format: "The Shift Of The Ages".

You have subscribed to alerts for Xara Zerion.

You have been added to Xara Zerion's favorite list.

You can also sign-up to receive email notifications whenever Xara Zerion releases a new book.