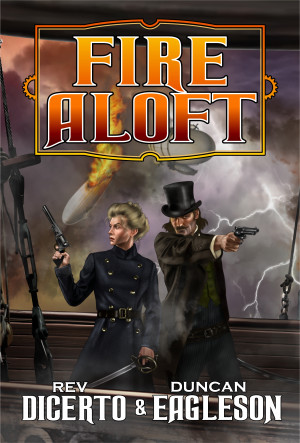 A consortium of businessmen, tired of losing money and goods to Gallagher and his pirate cohorts, has hired a former Confederate air admiral to hunt them down. Now Gallagher finds himself pursued by an overwhelming force led by the infamous Garrett "Butcher" Prescott, the man he blames for his brother's death, and the beautiful and accomplished Justine Arthurs, an airship pilot, former Pinkerton agent and Union spy. Gallagher thinks he's got a plan that will bring down the Valkyrie, Prescott's massive dreadnaught. What he doesn't know is that the chief engineer on the Valkyrie is his longlost brother.
Available ebook formats: epub
Price: $4.99 USD
Buy Add to Library Give as a Gift
How gifting works
Create Widget
Tags: fantasy civil war science fiction steampunk action adventure alternate history airships

You have subscribed to alerts for Rev DiCerto.

You have been added to Rev DiCerto's favorite list.

You can also sign-up to receive email notifications whenever Rev DiCerto releases a new book.