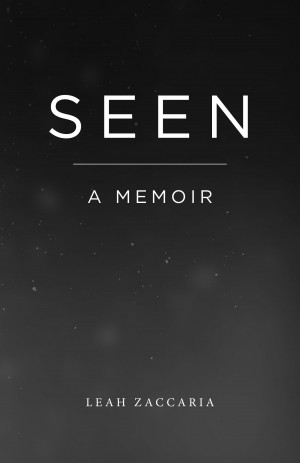 By Leah Zaccaria
An inspirational journey to openness and vulnerability, love and self-worth, seeing and being seen. More
From the outside, Leah Zaccaria appeared to have it all: the picture-perfect family, the stylish suburban home, the blossoming corporate career. But on the inside, she was still the lonely little girl hiding under the dining room table. The girl who hoped that, if she did everything right, someone would come to her rescue. That someone would finally see her.

It wasn’t until she started practicing yoga that she realized achievement isn’t the same as worth, and that conformity can’t buy love. Seen is the story of Zaccaria’s life, her transformation from exhausted overachiever to openhearted vulnerability seeker. Now, as a yoga teacher and owner of hauteyoga Queen Anne and shefayoga Roosevelt, she wants to share her journey—the wounds and the joys, the self-deceptions and the self-realizations—so that others will feel free to do the same.

Leah Zaccaria is a former certified public accountant with a master’s in taxation turned yogi entrepreneur. She took her first yoga class in 2006 and later decided to marry her business expertise with her passion for yoga and opened her first studio, hauteyoga Queen Anne, in 2009, followed by shefayoga Roosevelt in 2013. She created Sendatsu Evolution in 2015, a teacher-training and leadership program that hosts several trainings, retreats, and workshops annually. She lives in Seattle with her daughter.

You have subscribed to alerts for Leah Zaccaria.

You have been added to Leah Zaccaria's favorite list.

You can also sign-up to receive email notifications whenever Leah Zaccaria releases a new book.