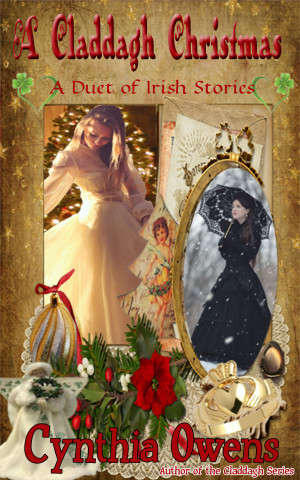 The Christmas Shop ~ Maeve Brennan has lost everything she holds dear: her husband, her three children, and finally her home.
Micheál Lynch has one dream: bringing Christmas back to his three young children. He’ll do anything to achieve that dream, even if it means risking his own life.
Can some tiny Christmas angels unite these two lonely souls and bring them a real Christmas…and love?

The Old Claddagh Ring ~ Anna Clare Wycliffe has spent seventeen years longing for the twin sister torn from her arms when they were little more than babies. A surprise letter from California spurs a secret plan to visit her sister…but with no money of her own, and about to make her entrance into New York society, how can she carry it out?
Joe Donavan grew up on the mean streets of New York. He owes everything to the brother-in-law who gave him a job and a chance to become a man. He’s determined not to let him down. But what happens when a golden-haired, violet-eyed girl steals his heart and asks his help in fleeing her unhappy home? Will Joe sacrifice his most prized possession to give Anna Clare her heart’s desire?

Cynthia believes she was destined to be interested in history. One of her distant ancestors, Thomas Aubert, reportedly sailed up the St. Lawrence River to discover Canada some 26 years before Jacques Cartier’s 1534 voyage. Another relative was a 17th Century “King’s Girl,” one of a group of young unmarried girls sent to New France as brides for the settlers there. Her passion for reading made her long to write books like the ones she enjoyed. A former journalist and lifelong Celtophile, she enjoyed a previous career as a reporter/editor for a small chain of community newspapers before returning to her first love, romantic fiction. Her stories usually include an Irish setting, hero or heroine, and sometimes all three. Her first novel, In Sunshine or in Shadow, released by Highland Press Publishing is set in post-Famine Ireland and is available from all online bookstores. It is available both in print and as an e-book. Its sequel, Coming Home, will be released by Highland Press soon.

You have subscribed to alerts for Cynthia Owens.

You have been added to Cynthia Owens's favorite list.

You can also sign-up to receive email notifications whenever Cynthia Owens releases a new book.