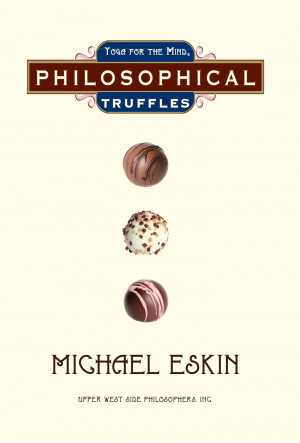 By Michael Eskin
These aphorisms and philosophical miniatures will astound, enliven, and inspire anyone ready and willing to risk a fresh, unflinching look at the world, humanity, and the often curious ways in which we think, act, and feel … Like truffles that gradually dissolve on our tongue, suffusing us with the gustatory memory of their transient shape and texture, and leaving us desiring more …

MICHAEL ESKIN was educated at Concordia College, the University of Munich and Rutgers University. A former fellow of Sidney Sussex College, Cambridge, he has taught at the University of Cambridge and at Columbia University. He has given workshops, lectured and published widely on literary, philosophical, ethical and cultural subjects, including: "Ethics and Dialogue in the Works of Lev⁠inas, Bakhtin, Mandel’shtam, and Celan"; "Poetic Affairs – Celan, Grünbein, Brodsky"; "17 Prejudices That We Germans Hold Against America and Americans and That Can’t Quite Be True" (published in German under the pseudonym ‘Misha Waiman’); "Philosophical Fragments of a Contemporary Life" (under the pseudonym ‘Julien David’); and "The DNA of Prejudice – On the One and the Many" (winner of the 2010 Next Generation Indie Book Award for Social Change); and "Yoga for the Mind: A New Ethic for Thinking and Being & Meridians of Thought" (with Kathrin Stengel). A frequent guest on radio programs throughout the US, Michael Eskin is a member of the Academy of American Poets and the PEN Center for German-Speaking Authors Abroad. He lives in New York City and is the cofounder of Upper West Side Philosophers, Inc.

You have subscribed to alerts for Michael Eskin.

You have been added to Michael Eskin's favorite list.

You can also sign-up to receive email notifications whenever Michael Eskin releases a new book.