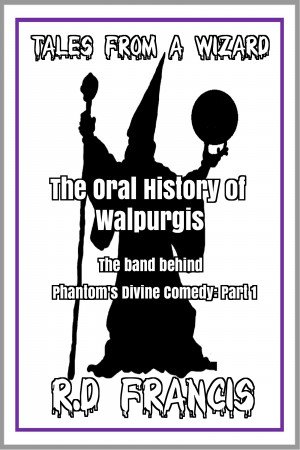 Tales from a Wizard: The Oral History of Walpurgis: The Band Behind Phantom's Divine Comedy: Part 1

This intimate history tells the Phantom’s story through the words of the family and friends, bandmates and musicians, and Detroit scenesters that spent time with, worked with, and witnessed the band live.

These are the continuing tales of the man who replaced Jim Morrison in the Doors.

R.D Francis previously explored the myth and legend of the Phantom in The Ghosts of Jim Morrison, the Phantom of Detroit, and the Fates of Rock ‘n’ Roll.

Schooled as an architectural draftsman and radio broadcaster, and after a detour as a sometimes music journalist, roadie, and rock bassist, a move from behind the microphone to the front of the camera led to the current endeavors of R.D Francis as a screenwriter specializing in sci-fi, horror, and comedy.

He is the writer of The Ghosts of Jim Morrison, The Phantom of Detroit, and the Fates of Rock 'n' Roll and its sequel, Tales from a Wizard: The Oral History of Walpurgis. Both are rock journalism tomes concerned with the 1974 Jim Morrison "solo album," Phantom's Divine Comedy: Part 1.

Another great book by the fabulous writer R.d Francis...and another "In deep" research for Phantom band and relatives.
Not only a study of mysteries about this legandary band,but also a trip into Detroit scene....essential for every serious rock and roll fan/researcher!
A must have!

You have subscribed to alerts for RD Francis.

You have been added to RD Francis's favorite list.

You can also sign-up to receive email notifications whenever RD Francis releases a new book.