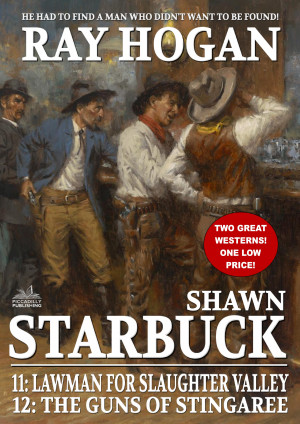 By Ray Hogan
Evil ranchers, ruthless henchmen, a corrupt mayor and roughneck cowboys - Shawn Starbuck has to face them all in Lawman for Slaughter Valley.
In The Guns of Stinagree, Starbuck finds himself involved in bloody night raids, a lynching and murder. But how can he stop the spreading violence?
Double the action in the Shawn Starbuck series. More
Lawman for Slaughter Valley:
Starbuck wondered if young Bishop really had the guts to last. Opposed by an evil rancher and his ruthless henchmen, a corrupt mayor and a townful of roughneck cowboys, he didn't have much of a chance. How could Starbuck help and still let Bishop prove himself a man, both to the skeptical settlement and his attractive young wife? But when Max Eagle, feared gunslinger, came to town seeking vengeance for the death of his brother, the man Bishop shot down in defense of his honor, Starbuck could wait no longer. For his decision might determine who would live and who would die!

The Guns of Stingaree:
The whole valley feared King Mallory and his savage land raids. Mallory owned Stingaree and most of the Gila Valley except for Arrowhead Ranch – land that he was determined to seize. Mallory offered Shawn Starbuck the job of heading his band of raiders. Though Starbuck refused, he still found himself involved in bloody night rides, a lynching, and murder. How could Starbuck stop the spreading violence? How could he right the savage wrongs that Mallory had committed … especially when young Jack Mallory seemed determined to continue the evil ways of his father? And what of Jack’s pretty sister, Christine? Would she really find love in the arms of young puncher Emmett Stark, who was seemingly on the wrong side?

Ray Hogan is an author who has inspired a loyal following ever since he published his first Western novel Ex-Marshal in 1956. Hogan was born in Willow Springs, Missouri, where his father was town marshal. At five the Hogan family moved to Albuquerque where Ray Hogan lived in the foothills of the Sandia and Manzano mountains. His father was on the Albuquerque police force and, in later years, owned the Overland Hotel. It was while listening to his father and other old-timers tell tales from the past that Ray was inspired to recast these tales in fiction. From the beginning he did exhaustive research into the history and the people of the Old West and the walls of his study were lined with various firearms, spurs, pictures, books, and memorabilia, about all of which he could talk in dramatic detail.
Among his most popular works are the series of books about Shawn Starbuck, a searcher in a quest for a lost brother, who has a clear sense of right and wrong and who is willing to stand up and be counted when it is a question of fairness or justice. His other major series is about lawman John Rye, whose reputation has earned him the sobriquet The Doomsday Marshal. "I've attempted to capture the courage and bravery of those men and women that lived out west and the dangers and problems they had to overcome," Hogan once remarked. If his lawmen protagonists seem sometimes larger than life, it is because they are men of integrity, heroes who through grit, character and common sense are able to overcome the obstacles they encounter despite often overwhelming odds.
This same grit of character can also be found in Hogan's heroines and, in The Vengeance of Fortuna West, Hogan wrote a gripping and totally believable account of a woman who takes up the badge and tracks the men who killed her lawman husband by ambush. No less intriguing in her way is Nellie Dupray, convicted of rustling in The Glory Trail. Above all, what is most impressive about Hogan's Western novels is the consistent quality with which each is crafted, the compelling depth of his characters, and his ability to juxtapose the complexities of human conflict into narratives always as intensely interesting as they are emotionally involving.

Double the adventure from Ray Hogan.

Shawn Starbuck scours the thousands of rugged miles through the wild Southwest, in search of his lost brother Ben. Each book brings Starbuck face to face with danger and possible death. Will he ever find a man who doesn't want to be found?

You have subscribed to alerts for Ray Hogan.

You have been added to Ray Hogan's favorite list.

You can also sign-up to receive email notifications whenever Ray Hogan releases a new book.