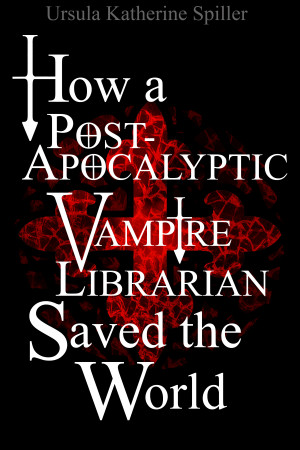 How a Post-Apocalyptic Vampire Librarian Saved the World

By Ursula Katherine Spiller
Rated 5.00/5 based on 3 reviews
Quentin was the local accidental librarian. Accidental because he was of course not a trained librarian, and there were hardly any people to visit his library in the classical sense, not in damn near two hundred years. Unfortunately, just because the world had ended, that didn't mean it needed no more saving. And someone's gotta do it, right?
Available ebook formats: epub mobi pdf lrf pdb txt html
First 20% Sample: epub mobi (Kindle) lrf more Online Reader
pdb
Price: $3.99 USD
Buy Add to Library Give as a Gift
How gifting works
Create Widget
Tags: vampires adventure humor sarcasm postapocalyptic nerd culture movie culture
About Ursula Katherine Spiller

Ursula Katherine Spiller was born on 19. March 1977 in Switzerland and wrote her first stories by dictating them to her mother who was much faster at typing than little Ursula. Little Ursula soon grew old enough to do her own typing and wrote what she would later learn is called "fanfiction". In fact, she wrote quite a lot of that. Incessantly. As an avid fandomer, she never lacked material, but it took some time before she eventually decided to invest in her own characters.
Aside from the whole writing thing, Ursula has also raised an awesome son on her own and has a Master's Degree in English Literature and Communication Sciences. Her thesis was something about blood and Dracula and was totally cool.
"The Coffee Shop AU" is her fourth original novel. As you'll soon see, the characters in this series like to hop between different stories and genres. So, if you want to know how Kiki and his compatriots would act in a completely different setting, you might want to check out Ursula's detective novel "Cookie", the fantasy novel "Q's Key", or "How a Post-Apocalyptic Vampire Librarian Saved the World".

Are you a librarian? Do you like vampires? Do you enjoy post-apocalyptic stories? Do you like fantasy books with awesome, unique plots and dynamic characters? If you answered yes to any of those, read this book!! Just try the free preview and I promise you’ll get hooked! As soon as I finished reading this I promptly purchased her other two books and asked if any more were in the works!!

Compelling characters, witty and self-aware dialogue, a successful touch of meta-humour and a really awesome action scene at the climax. The main character's constant air of exasperated world-weariness that he hides behind a veneer of cynicism and snark is enjoyably relatable, and (minor spoilers, sorry) the fact that there's a gay romance that's treated as no big deal is nice as well.

„How a Post-Apocalyptic Vampire Librarian Saved the World“

The title alone awoke my interest: Not only having a post-apocalyptic scenario AND a Vampire as a main character, no, it also suggested a slightly humorous approach. Three things I like, mixed into one story... Dangerous! Would it hold up against my favorite apocalyptic books or movies (like Stephen King's "The Stand" or the TV series "Jericho") and my favorite vampire stories (from Mark Rein-Hagen's incredible layered "Vampire: The Masquerade"-Universe)?

I was lucky enough to read it two weeks before the official release and I was not disappointed. On the contrary. Some may find the start a tad slow, but I enjoyed how the author took her time to let me get familiar with the main protagonists. It may be hard to believe (after so many movies and stories about vampires), but she has been able to give the theme a fresh and interesting perspective, with intellectual as well as emotional depths, creating characters that actually are likable and believable. Something a lot of movie makers or authors keep neglecting, playing on the same stereotypes over and over.

On some occasions the story may be a little bit predictable, but the characters and the authors fine humor (and a lot of references to movie and nerd culture!) more than make up for it. Without spoiling: It really got better and better and I enjoyed reading this book. It has a satisfying ending (not like more and more books recently where you are left feeling this was just the first half of a book split for profit reasons!), and still leaves you interested in the past and future of Quentin, Jana and Calynn.

I can highly recommend this book and it made be curious enough to buy the author's first two books, too!

You have subscribed to Smashwords Alerts new release notifications for Ursula Katherine Spiller.

You have been added to Ursula Katherine Spiller's favorite list.

You can also sign-up to receive email notifications whenever Ursula Katherine Spiller releases a new book.