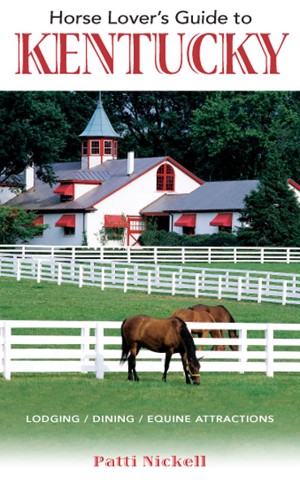 By Patti Nickell
Horse Lover's Guide to Kentucky takes readers inside the most famous farms of the Bluegrass, visits its historic racetracks, and provides information on a host of equine-related and non-equine attractions. The guide also recommends unique places to stay, dine, and shop.

Patti Nickell is a freelance travel writer whose assignments have taken her to 101 countries and six continents, where she has gotten plenty of fodder for her bi-monthly travel features in the Lexington Herald-Leader.
Her articles have also appeared in numerous newspapers, including the Washington Post, San Antonio Express News, Fort
Worth Star Telegram, Dallas Morning News, and USA Today, and
in magazines such as Keeneland magazine, Elite Traveler, Woman’s Day, European Homes and Gardens, Atlanta Homes & Lifestyles, Las Vegas magazine, Forbes, and Forbes Asia. In addition, she has contributed to Fodor’s Travel Guide and television’s The Travel Channel, and has done consulting work for the Kentucky Department of Tourism and the Lexington Convention & Visitors Bureau.
Prior to moving to Lexington, Patti lived in New Orleans, where
she was a staff writer for CityBusiness newspaper, and contributed to New Orleans magazine, Southern Woman, Gambit, and the Times-Picayune, and served as travel editor of New Orleans City Life magazine. She was the recipient of the New Orleans Press Club’s highest award for print journalism, the Alex Waller Award, for a piece that appeared in New Orleans magazine.
Horse Lover’s Guide to Kentucky is her first book.

You have subscribed to alerts for Patti Nickell.

You have been added to Patti Nickell's favorite list.

You can also sign-up to receive email notifications whenever Patti Nickell releases a new book.