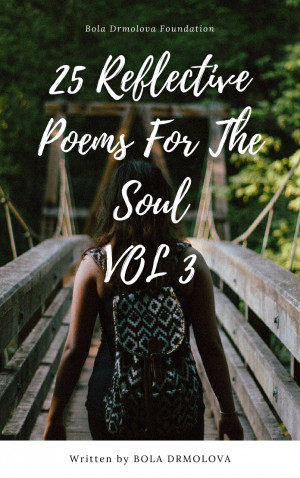 By BOLA SHOYEMI-IBRAHIM
Poetry forces you to reconnect to what matters the most. Your spirit, soul and body. It aligns you back to your Creator, nature and humanity. These short poems are written so that you can enjoy reading poetry in small bites with messages that you can connect too and understand. The ultimate aim after reading each poem is awareness of where you are in life and the hope that life changes occurs! More
Poetry has no colour. Music has no colour. Dance has no colour. Your Spirit and Soul have no colour. Learning has no colour. Reading has no colour and most importantly love has no colour. Remain colourless and embrace all colours of life through kindness, love, thoughtfulness, care, consideration and respect for your fellow human being......…©Bola Drmolova

"Poetry nourishes the soul, washes away the debris of life, lifts you up beyond your own imagination, sets your soul free and ignites the time you spend reading it ©Bola Drmolova

This age of information technology steals many hours out of our lives without us even realizing it. There are many voices, noises, personal and family problems, work issues, financial, social, global needs and challenges surrounding and pressuring us from all side. It is very easy to forget to pause, reflect, meditate and be in tune with our Creator and our environment.

Poetry forces you to reconnect to what matters the most. Your spirit, soul and body. It aligns you back to your Creator, nature and humanity. These short poems are written so that you can enjoy reading poetry in small bites with messages that you can connect too and understand. The ultimate aim after reading each poem is awareness of where you are in life and the hope that you will make changes to your life.

Bola Drmolova is a businesswoman with nearly 20 years of business expertise and experience in training, construction, petrochemical and physical trading commodities, finance, recruitment and consultancy. She is also an abstract painting artist.

Bola attended Acton Reynalds School in Shrewsbury Shropshire, England. This was followed by South Thames College for her A Levels. She obtained her BSc (Hons) in Estate Management and BA (Hons) Law at University of Greenwich. She went on to do her Masters in Law (LLM) at University of London Queen Mary and Westfield College specializing in International Trade Law, Marine Insurance, European Trade Law and General Insurance law.

This was followed by Legal Practice Course at The College of Law Store Street in London.

She is about to embark on several Leadership Executive Programmes at Harvard University, Oxford and Cambridge Universities. She is the Founder of Bola Drmolova Trust and Bola Drmolova Foundation. The Foundation is a private Christian foundation with focus on harnessing the gifts of its founder and other talented individuals within the creative industries. The Foundation supports both Christian and non-Christian Charities. The Foundation currently has transferred to it from its owner over 750 poems, 10 film-scripts and over 90 music lyrics.

The founder hopes to establish the photography section of the Foundation by focusing primarily on human suffering and hoping to bring the plight of the poor, underprivileged, under-represented, and mostly refugees to light in Africa and other heavily affected areas around the world. The founder is currently working on 50 volumes of poetry books and have completed seventeen volumes with the remainder planned for the next three years. Our aim is also to support over 50 charities from our income whether directly or through capacity building. The charities we have chosen to work with are listed on our Foundation’s website.

Bola lives in Rochester Kent with her three children. She has been writing poems, songs, film scripts for over three decades. She is a passionate Christian whose works are created for the lifting up of humanity. In addition to her consuming love for Christ, she also loves architecture, interior design, opera, theatre, museums, quiet & tranquil environment, praying, reading, movies, and walking.

You have subscribed to alerts for BOLA SHOYEMI-IBRAHIM.

You have been added to BOLA SHOYEMI-IBRAHIM's favorite list.

You can also sign-up to receive email notifications whenever BOLA SHOYEMI-IBRAHIM releases a new book.