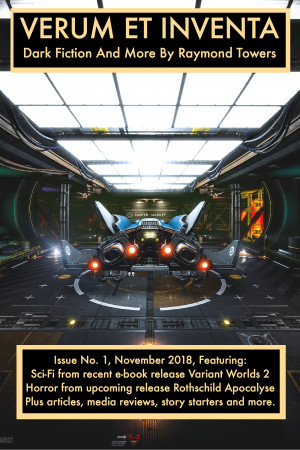 Raymond Towers is an author of fantasy, horror and science fiction that strays away from the mainstream, plus a little in the way of true paranormal and other genres. He has written and independently published over forty titles, most of them full-length novels and collections, with several more on the way. The author has been a lifelong resident of warm and sunny southern California, a location that pops up frequently in his writing. At the moment, the author is looking for ways to reach new readers all over the world, in addition to pursuing his great love of writing and taking it to the next level.

Verum Et Inventa is a free e-zine focusing on dark fantasy, horror and science fiction. We’re open to contributions from writers and readers who like substance and style over the blander mainstream norm. The editor will also provide controversy with articles and media reviews meant to incite the intellect of those open-minded enough to question traditional paradigms, social constructs and religious dogma. If you consider yourself Awake and enjoy a good story, why not download a copy today?

Review
Jerald Jones reviewed on Sep. 26, 2019
(no rating)
Looked at Issue 1 because of the advertisement of the article "Space-Based Starships And Colonies to give budding writers a good grounding on the basics." very shortly after starting the article I come across this, "A sample sail ship could weight"...(should be weigh and who cares about weight in the absence of a gravity field you weigh NOTHING. Might want to talk about MASS.) ..."10 million kilograms (10,000 pounds) and have the shape of a cone to lessen drag and deflect incoming objects."
Really? I guess on your planet there is a very different definition of MASS and/or WEIGHT. Doing a simple conversion of 2.2 pounds per kg X 10,000,000 kg=22, 000,000 Pounds. This isn't higher math for goodness sake. Now I can imagine that you meant 10000 tons; but 22,000,000 pounds / 2000 pounds per ton = 11000 tons. Also your types of space drives appears to ignore the primary one being worked on right now which is the warp-drive. Look it up. How would a cone shape lessen drag and deflect incoming objects. A solar sail would have to be made of extremely strong material to deflect anything. The surface area facing whatever ions or particles inhabit interstellar space is going to be the same cone shaped or mildly curved otherwise why would light hitting the sail be anymore effective at driving the ship in one direction while the interstellar medium would not?

You have subscribed to Smashwords Alerts new release notifications for Raymond Towers.

You have been added to Raymond Towers's favorite list.

You can also sign-up to receive email notifications whenever Raymond Towers releases a new book.