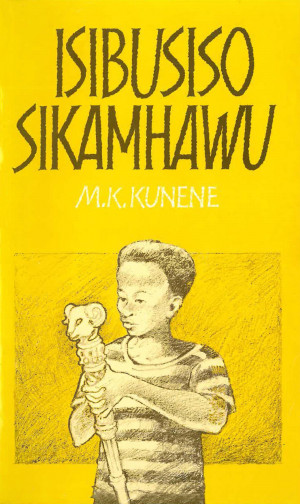 Mazisi Raymond Fakazi Mngoni Kunene was born in 1930, in Durban and raised in Amahlongwa. He earned a teaching certificate at Maphumulo Teachers’ Training College and a Master of Arts (MA) at the University of Natal and continued his study of iSiZulu poetry at the School of Oriental and African Studies. He later earned a Doctorate of Literature from the University of KwaZulu- Natal in 2000 upon his return from exile.

After leaving South Africa in 1959, he went to live in London. Together with fellow exiled writers, such as Es'kia Mphahlele, Keorapetse Kgositsile, Cosmo Pieterse and Dennis Brutus, they played a pivotal role in exposing the injustices of Apartheid. In 1962, he became the Chief Representative of the African National Congress (ANC) in Europe and the United States of America (USA). A founding member of the Anti-Apartheid Movement in Britain, Prof Kunene worked closely with ANC figures Moses Mabhida, Oliver Tambo and Robert Resha. It was during his life in exile that he published numerous works including epic poems such as Anthem of the Decades, Emperor Shaka the Great, and poetry anthologies, The Ancestors and the Sacred Mountain and Zulu Poems.

In 1966, the South African government banned his work which meant that he was then not able to publish his work in the land of his birth. In 1972, he organized the South African Exhibition Appeal, which saw a number of prominent artists supporting this initiative.

Professor Kunene had in his lifetime written more than 10 000 epics, poems, essays, short stories, nursery rhymes and Zulu proverbs and published many of them. There are still many of his works as yet unpublished such as the original iSiZulu manuscript, UNodomehlezi KaMenzi (Emperor Shaka the Great) or Inklokomo Inyimenaka (Anthem of the Decades). Unlike many of his peers, he wrote primarily in iSiZulu and would himself translate some into English as he did with Emperor Shaka the Great (published first in 1979). Many of his books are available only in Zulu, such as Igudu lika Somcabeko (1997) and iSibusiso Sikamhawu (1994). Other work in English includes Echoes from the Mountain: New and Selected Poems (2007) and Anthem of the Decades. Prof Kunene had also edited and published anthologies in Zulu Poems (1970) and The Ancestors and the Sacred Mountain (1982).

He was Professor Emeritus at the University of California, Los Angeles (UCLA) where he lectured for more than 19 years, while living in the USA with his family. Kunene also taught at the National University of Lesotho and the University of KwaZulu-Natal (UKZN). He returned to South Africa in 1993, towards the end of the Apartheid era.

In 2005, he was appraised as the first South African Poet Laureate and later in 2015 was posthumously awarded the South African Traditional Music Award (SATMA) Lasting Legacy Award. Prof Kunene received many accolades and awards during his lifetime.

Professor Kunene passed away in 2006 in Durban after an extended illness and was laid to rest in his village homestead of Amahlongwa on the South Coast of Durban.

You have subscribed to alerts for MK Kunene.

You have been added to MK Kunene's favorite list.

You can also sign-up to receive email notifications whenever MK Kunene releases a new book.