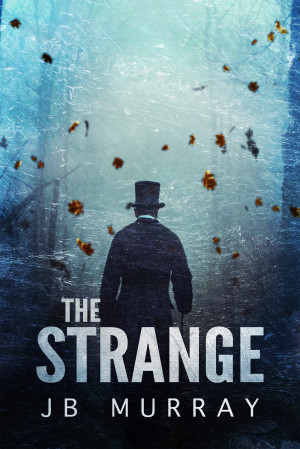 An imaginative walk through history and fiction.

Clara and Reynolds are thrust together by both the mysteries of their pasts, and the enigmatic Poe. But all who help Poe meet death itself. Will Clara and Reynolds be able to destroy an undying evil, or will they become the hunted? More
Edgar Allan Poe… haunted… dark… mysterious… time traveler?

A timeless nightmare stalks both the day and night. It’s taken everything from Poe, compelling the man to traverse time itself in search of a savior.

Reynolds, a man broken by tragedy, and Clara, a woman who’s lost so much in her young life are thrust together by the enigmatic Poe to aid his quest. Will the two succeed in hunting the most cunning of history’s greatest monsters? Or will they become the hunted?

Meanwhile in Europe, Byron and Mary work relentlessly in creating a monster of their own, for the purpose of eradicating such an evil. But have they gone too far? And what consequences have they wrought upon this world?

The Strange is a place where history meets fiction and the two dance delightfully to the calliope of the supernatural, science fiction, mystery, horror and suspense.

JB Murray lives in a quiet little town in central Ma., with his 6 year old Husky Miska, a couple of cats and his two turtles, Elvis and Ophelia. Geeks out over Star Wars and Stranger Things... with a fascination for "old school" horror. He's an always-fan of old literature... consuming the greats like Edgar A. Poe, Mary Shelley, Dickens, and such. His influences include those above, as well as Bradbury, Phillip K. Dick, Burroughs, Anne Rice, Neil Gaiman and of course... Stephen King. A writer from a young age, JB et aside his aspirations of being an author to pursue musical endeavors. Those endeavors led to the recording and release of three albums with his band Evenspeak and years of continued musical enjoyment.
Back now, at the keyboard, he's hammering away at those ideas that have been lodged in his imagination over the years. And there'll be lots to come!

You have subscribed to alerts for JB Murray.

You have been added to JB Murray's favorite list.

You can also sign-up to receive email notifications whenever JB Murray releases a new book.