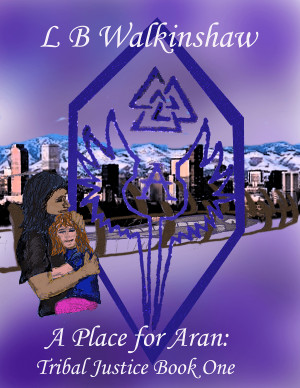 Tribal Justice Book One- A Place for Aran

By L B Walkinshaw
Adult

Rated 3.50/5 based on 2 reviews
Aran is out on the streets after running from an abusive home only to be cornered by three thugs. She is rescued by a spaceport mechanic. Bry'n, part of the Arothes, one of the five tribes governing the reservation in the center of Ciat. He gives her love, discipline, and hope for the future; things she never had before. More
A young girl, Aran, is beset by some thugs who want to ‘play’ with her. She ran away from her abusive brother to roam the streets of Ciat with no particular plan...simply survive. She's rescued by Bry’n, a shuttle mechanic at the spaceport and a member of the Arothes, one of the five tribes governing the center of Ciat, the largest city on the earth colony of Ulvesang, Norwegian for Wolfsong. She finds herself in a safe haven. The tribes take in strays of the two-legged variety and rehabilitate them. The youngsters are raised with tough love and large quantities of nurturing care, as well as nutritious food from the hydroponics farm worked by members of the tribe. Aran has a choice to join the tribe after being in quarantine for six months. It doesn’t take much thinking to decide what she wants to do. The other choice is the Vipers, a street gang run by their vicious leader, Giz, who specializes in torturing and killing kids. He is up to something, but they are not sure what at this point.

Author's note: The villain is introduced about halfway through the book. The adult rating is due to some of the scenes in the second half. The first half is fairly tame.
Available ebook formats: epub mobi pdf lrf pdb txt html
First 25% Sample: epub mobi (Kindle) lrf more Online Reader
pdb
Price: $3.99 USD
Buy Add to Library Give as a Gift
How gifting works
Create Widget
Tags: romance fantasy family science fiction spanking abuse family bonding
About L B Walkinshaw

L B Walkinshaw served in the US Air Force as an RC-135 navigator from 1990-1997 after graduating from the US Air Force Academy in 1990. She was in the classroom for several years as a pre-K teacher and Special Needs Para and is now driving a school bus, with several other jobs in between. She's been told she has an interesting resume. She loves reading, writing, art, kickboxing, fishing, and nature. Currently, she lives in Denver, Colorado but would be more than happy to be living off the grid in the mountains. This is her first book but not the last.

Learn more about L B Walkinshaw 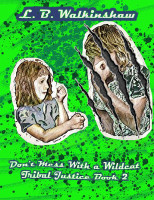 The author's blue-collar bio alone was enough to get me to look at this. Walkinshaw is nothing like your typical novelist, but her life experiences infuse this story of an abused child's rescue and awakening with vivid details and wonder. Can't a gurl just be nozy? Unlike other futuristic outer-space epics I've read, this tale feels natural – you know, granola crunchy – even as unfamiliar lingo slips in, the way it does in everyday life. Having a tribe for support adds an air of hope throughout, along with what I sense is a Native American awareness. Crucially, this takes place in a larger civic system where police seem to be nonexistent. (Step back, and you can question what's preventing a complete breakdown into chaos. Oh, yes, and the casual nudity and affection within the tribal circle while protecting young Aran and the other singles in the community can also be problematic.) There are essentially two parallel novels running here, one informing the other, but their overlap does cause some confusion. Deal with it. The sprawling narrative could use some judicious pruning, distillation, and the physical discipline and overly male authority disturb me – we can discuss it elsewhere, I suppose – I would like to see women included more in the leadership. Yes, the novel's imperfect, but as a hefty debut, it presents an emotionally rich triumph of goodness within a warrior society.

This story starts out good then it gets confusing the storyline is hard to fallow and there is parts that repeat action with different people .and the story drags on

(reviewed 7 days after purchase)
Suzie Johnson reviewed on Oct. 28, 2018
(no rating)
Given that I'm not a reader, I have enjoyed reading this book so far. I haven't gotten far enough along to make very specific comments other than I enjoy the character, Aran.

You have subscribed to alerts for L B Walkinshaw.

You have been added to L B Walkinshaw's favorite list.

You can also sign-up to receive email notifications whenever L B Walkinshaw releases a new book.