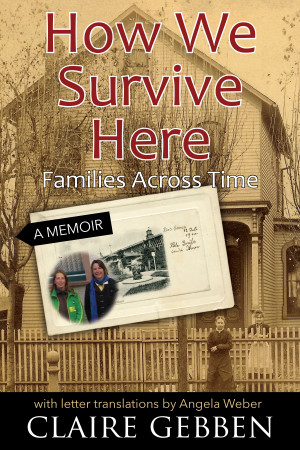 How We Survive Here: Families Across Time

By Claire Gebben
The discovery of 19th-century letters propels Claire Gebben on a challenging quest spanning two centuries and five generations, weaving together a compelling memoir of how we must strive to survive. More
As far back as Claire Gebben can remember, her grandmother wrote letters to the "relatives in Freinsheim," relatives living in a rural wine-making town in Germany. After her grandmother died, Claire's father and family kept the tradition alive, writing letters and emails, and also visiting the relatives in person. Then in 2008, when Claire's relative Angela Weber travels from Germany to visit her in the Pacific Northwest, Angela brings along a surprise--over a dozen 19th-century letters found in an attic in Freinsheim written by their common ancestors.

As the two set out to translate the Old German Script, Claire and Angela become captivated by the stories, and the immigrants' impressions of the New World. That same fall, Claire enters a Master of Fine Arts in Creative Writing program and chooses to write about the people of the letters for her graduate thesis. Her decision sparks a journey both challenging and inspiring, a research adventure including four days of intensive blacksmithing and a month-long stay in the German Rhineland-Palatinate.

Even as Claire wrestles to bring her ancestors to life on the page, she suffers through loss in her own life and finds strength through new family connections. Via 19th-century correspondence, 21st-century emails, and present-day relationships and encounters, How We Survive Here: Families Across Time weaves together a story of how we must strive to survive, amid experiences past and present, and within the broader sweep of history.

Claire Gebben was born and raised on the southeast side of Cleveland in Moreland Hills, Ohio. She’s of German and Scottish descent, but the German side of my family were more meticulous record-keepers. In 1980 she earned a BA in Psychology from Calvin College in Grand Rapids, Michigan. Along with her husband, she moved seven times in seven years, living in Grand Rapids, Ann Arbor, Cleveland, and Buffalo before landing in Seattle, Washington. She’s worked as a resource center manager, newspaper columnist, newsletter editor, ghostwriter, in desktop publishing, multi-media, and communications, all the while raising a family and pursuing her first love of reading and writing. In 2011, she earned an MFA in Creative Writing through the Northwest Institute of Literary Arts on Whidbey Island, Washington. Her writing has appeared in Shark Reef, The Speculative Edge, Soundings Review, The Fine Line, and ColumbiaKIDS e-zine. The Last of the Blacksmiths is her first novel. For more information, go to clairegebben.com.

You have subscribed to alerts for Claire Gebben.

You have been added to Claire Gebben's favorite list.

You can also sign-up to receive email notifications whenever Claire Gebben releases a new book.