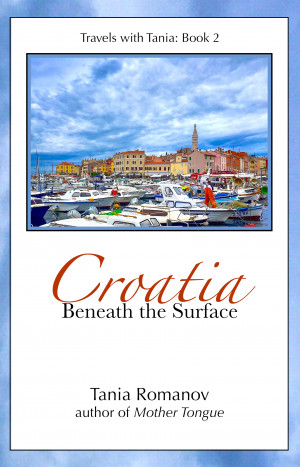 Croatia: Beneath the Surface

Tania Romanov Amochaev was born in Belgrade, Serbia of two displaced émigrés ― a Russian father and a Croatian mother ― and spent her childhood in San Sabba, a refugee camp in Trieste, Italy. After arriving in America on the SS Constitution in 1954, Amochaev grew up in San Francisco, California and earned a degree in mathematics from the University of California, Berkeley. She then forged a successful business career, serving as CEO of three technology companies, earning an MS in Management from the Stanford Graduate School of Business, and receiving an honorary PhD from Saint Catherine University in Minneapolis, Minnesota.

Amochaev is a founder of the Healdsburg Literary Guild in California and the educational non-profit Public School Success Team, which mobilizes community volunteers to reduce public high school dropout rates. She has climbed Mount Whitney and Mount Kenya, circumnavigated Annapurna, trekked through Bhutan and Kashmir, and sailed along remote rivers in Burma (Myanmar). She lives in San Francisco, but spends several months each year traveling the world.

Learn more about Tania and follow her blog at taniaromanov.com

You have subscribed to alerts for Tania Romanov.

You have been added to Tania Romanov's favorite list.

You can also sign-up to receive email notifications whenever Tania Romanov releases a new book.