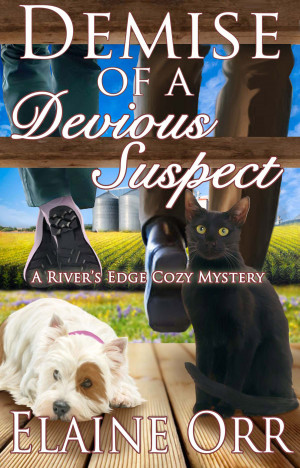 Demise of a Devious Suspect

By Elaine L. Orr
Melanie finds a body in the coat closet at the Farm Bureau dinner. Tired of fingers pointing toward her and curious about why someone burned some of her late father's files, Mel does some poking on her own. The kidnapping of a local woman raises the stakes. With pets who have a nose for trouble, Melanie seeks a devious suspect. More
Life for Melanie has returned to normal. She works as a gardener with friend Stooper, eats at Mason's Diner, and sits on her farmhouse porch with friends Syl and
Sandi. Her biggest challenge is helping Mr. Tibbs get used to the still-unnamed black cat that sauntered into the household.

And then she finds a body in the coat closet at the Farm Bureau dinner. The local grain operator had angered farmers with increased prices, but who kills for an extra few cents per bushel of corn?

Tired of fingers pointing toward her and curious about why someone burned some of her late father's files, Mel does some poking on her own. The kidnapping of
a local woman raises the stakes.

Elaine L. Orr writes four mystery series, including the eleven-book Jolie Gentil cozy mystery series. Behind the Walls was a finalist for the 2014 Chanticleer Mystery and Mayhem Awards. The first book in her River's Edge series, From Newsprint to Footprints, came out in late 2015, and the Logland series began with Tip a Hat to Murder in 2016. The 2020 Family History Mystery Series began with Least Trodden Ground. Demise of a Devious Neighbor, the second River's Edge book, was a Chanticleer finalist in 2017. Elaine also writes plays and novellas, including the one-act play, Common Ground published in 2015.

Her novella, Falling into Place, tells the story of a family managing the results of an Iowa father’s World War II experience with humor and grace. Another novella, Biding Time, was one of five finalists in the National Press Club's first fiction contest, in 1993. In the Shadow of Light is the fictional story of children separated from their mother at the US/Mexico border. Elaine conducts presentations and teaches online classes on book publishing and other writing-related topics. Nonfiction includes Words to Write By: Getting Your Thoughts on Paper and Writing When Time is Scarce. She graduated from the University of Dayton and the American University. A member of Sisters in Crime and the Indiana Writers Center, Elaine grew up in Maryland and moved to the Midwest in 1994.

Her fiction and nonfiction are at all online retailers in all formats -- ebooks, paperbacks, large print, and (on Amazon, itunes, and Audible.com) audio in digital form. Support your local bookstore!

Life along the Des Moines River in Iowa can be peaceful, but the occasional murder disrupts the tranquility. Iowa nice meets murder.

Reviews of Demise of a Devious Suspect by Elaine L. Orr

You have subscribed to alerts for Elaine L. Orr.

You have been added to Elaine L. Orr's favorite list.

You can also sign-up to receive email notifications whenever Elaine L. Orr releases a new book.