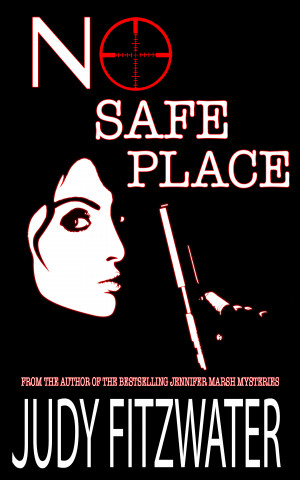 By Judy Fitzwater
College professor Elizabeth Larocca’s worst nightmare has suddenly become reality. The shadowy past of her estranged dead husband Stephen has put her and their 23-year-old daughter in danger. His enemies are after them, convinced they know a secret Stephen took with him to his grave. They need help. But which of Stephen's friends can they trust? More
From the author of Drowning in Air and The Jennifer Marsh Mysteries comes a twisty, suspenseful tale of love, trust, and betrayal: No Safe Place

College professor Elizabeth Larocca’s worst nightmare has suddenly become reality. The shadowy past of her estranged dead husband Stephen has put both her and their 23-year-old daughter Cara in danger. His enemies are after them, convinced they know a secret Stephen took with him to his grave. Their only choice: flee and desperately try to unravel why Stephen was killed. But which of Stephen’s friends pursuing them can Elizabeth believe? One wants her dead. One wants to protect her. The wrong choice could cost both her and her daughter their lives.
Available ebook formats: epub mobi pdf lrf pdb txt html
First 20% Sample: epub mobi (Kindle) lrf more Online Reader
pdb
Price: $4.99 USD
Buy Add to Library Give as a Gift
How gifting works
Create Widget
Tags: romantic suspense adventure woman in jeopardy mother daughter strong heroine heroine peril action heroine badass heroine
About Judy Fitzwater

Reviews of No Safe Place by Judy Fitzwater