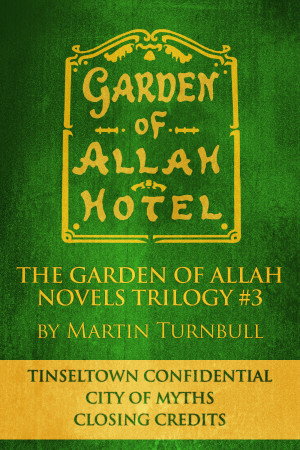 1950s Hollywood saw the beginning of the end of everything: the Eisenhower Years and everything it represented, the restrictive Production Code, Hollywood’s golden-era studio system...and the Garden of Allah Hotel. The times they were a-changing and Hollywood's denizens needed to change with them or be left behind.

Book Seven: "Tinseltown Confidential"
As America embraces the 1950s, television is poaching Hollywood’s turf and Joseph McCarthy forces exiled screenwriter Marcus Adler fights to finally clear his name. Hollywood reporter Kathryn Massey knows a secret that might take down a charismatic figure out to intimidate the film industry. When “Confidential” magazine arrives, Gwendolyn Brick figures she’s got nothing to hide - until she does.

Book Eight: "City of Myths"
Losing herself one headline at a time has dumped Kathryn Massey at the bargaining table with the man she trusts the least. Now that Gwendolyn Brick is a costumer at 20th Century-Fox, she finds that her friendship with Marilyn Monroe puts her into the crosshairs of Darryl Zanuck. Exiled in Rome but under the spell of romance, Marcus Adler must learn to say goodbye in order to give love a chance.

Martin Turnbull has worked as a private tour guide showing both locals and out-of-towners the movie studios, Beverly Hills mansions, Hollywood hills vistas and where all the bodies are buried. For nine years, he has also volunteered as an historical walking tour docent with the Los Angeles Conservancy. He worked for a summer as a guide at the Warner Bros. movie studios in Burbank showing movie fans through the sound stages where Bogie and Bacall, Bette Davis, Errol Flynn, and James Cagney created some of Hollywood’s classic motion pictures.

From an early age, Martin was enchanted with old movies from Hollywood’s golden era–from the dawn of the talkies in the late 1920s to the dusk of the studio system in the late 1950s–and has spent many, many a happy hour watching the likes of Garland, Gable, Crawford, Garbo, Grant, Miller, Kelly, Astaire, Rogers, Turner, Welles go through their paces.

When he discovered the wonderful world of biographies, autobiographies, and memoirs, his love of reading merged with his love of movies and his love of history to produce a three-headed hydra gobbling up everything in his path. Ever since then, he’s been on a mission to learn and share as much as he can about this unique time.

Originally from Melbourne, Australia, Martin moved to Los Angeles in the mid-90s.

You have subscribed to alerts for Martin Turnbull.

You have been added to Martin Turnbull's favorite list.

You can also sign-up to receive email notifications whenever Martin Turnbull releases a new book.