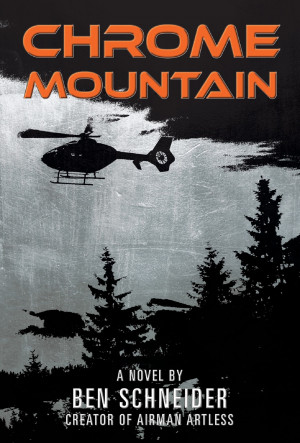 By Ben Schneider
Hunted by her brutal ex-boyfriend and his crime ring, Sonya took the roads less traveled. One road led her to a worse threat...to the entire country. More
Inventor Trey Radisson ended a revolutionary project to prevent a threat to the free world. Now, a greater threat means to acquire his expertise, turning his road trip into a high-speed pursuit. Chrome Falcon, the near future’s top terrorist force, leaves a path of ruin while trying to snare Trey and turn the law against him. Sonya McCall, a former outlaw on a Harley, becomes his only ally. The zany duo evade all who scour the country for them, finding adventure, hazard, hilarity, friendship, and more while searching for a way back to a normal life.

Ben Schneider was born in Oklahoma. In 2003, he earned a B.A. in Graphic Design at Oklahoma University, married his fiancée, and joined the Air Force. Ben and his wife, Suzy, have been stationed in Italy, Okinawa, and Alaska. Aside from writing fiction, Ben’s other interests include drawing cartoons—primarily his Airman Artless comic strips. Chrome Mountain is his debut novel.

You have subscribed to alerts for Ben Schneider.

You have been added to Ben Schneider's favorite list.

You can also sign-up to receive email notifications whenever Ben Schneider releases a new book.