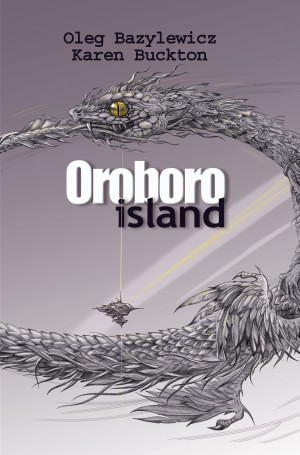 By Oleg Bazylewicz
Who built Earth's amazing megalithic structures with technologies still unknown to us?
Who taught our primitive ancestors various arts and crafts?
Who influenced so many legends about the ancient origins of our world?
One day we'll find out.
In the future, we shall discover many fascinating technologies, including time travel.
And then we shall jump Backtime… More
At the beginning of the 23rd Century, humanity is on the brink of destruction due to intense tectonic activity causing land riffs, tsunamis and volcanic eruptions. Three time-travel vessels are launched back into the past, using the recently discovered Omega-Field energy source, to allow extra time to conduct research for a solution.

This mission is thrown into chaos, however, when two of the ships end up on an island later called “Oroboro Island” in the age of the dinosaurs, while the third ship lands in the Andes Mountains 12,000 years B.C. during the Stone Age.

The voyagers meet other sentient beings that Earth has produced and sustained in multiple planetary time streams. They learn that the history of our world is very complex and that certain myths and mysteries are explained by an astonishing loop in which their particular time stream is trapped.

After finishing my academic career, I worked in project management in industry and construction. At the same time I practiced in creative writing, painting and drawing.
Since 2011 I fully concentrated on screenplay writing for feature, TV and documentary, book writing, as well as on painting, drawing and graphic design. Basically, during this period I did the following:
• Managed successful media and consultancy projects;
• Consulted in business development for chemical and environmental technologies;
• Designed business profile, event and project brochures;
• Wrote and edited landing texts, articles and presentations (writing in English, Ukrainian, Russian, Polish);
• Led creative groups working on commercials, different media and PR projects;
• Designed and directed visual and sound arts for a variety of digital platforms, film, TV and media;
• Designed, developed, led, stand-up presented and hosted different film and TV projects and shows;
• Wrote screenplays for TV, documentary and feature films; worked on budgeting and promotions;
• Wrote, edited, translated articles and books.
• With my father, co-wrote two books on football: The System (non-fiction, bio, history, analysis) and The Basics of Football Gameplay organization (guidance for trainers)

You have subscribed to alerts for Oleg Bazylewicz.

You have been added to Oleg Bazylewicz's favorite list.

You can also sign-up to receive email notifications whenever Oleg Bazylewicz releases a new book.