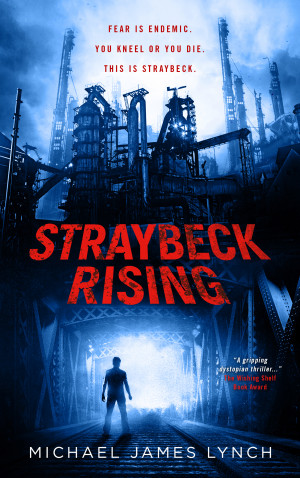 Rated 4.00/5 based on 1 reviews
In Straybeck, the rules are simple. You kneel...or you die. When Ryan refuses to accept this truth, he is dragged into the city's underworld. A place where revolutionaries and criminals fight against the Government and even the giants can't keep blood off the streets.
*Author Shortlisted for the Legend Writing Award* More
Fear is endemic.... You kneel, or you die... This is Straybeck...

The Premier demands loyalty and controls his people through terror and violence. Thirty-three years ago, Robb Calloway almost died when he stood against the Government. He was captured, tortured and forced to live out his days a broken man.

Now he watches helplessly as his eldest son - Ryan - follows the same path. Ryan slips deeper into Straybeck’s underworld where revolutionaries and criminals fight against the gunnermen. A place where truth and lies are beyond separation and even the giants can’t keep blood off the streets.

Straybeck Rising is the heart-breaking story of one family’s struggle to survive. It shows a boy growing up too fast and a father and brother who can’t keep him safe. A must-read story that rocks the dystopian genre with its compelling blend of sci-fi and fantasy.

Michael Lynch started life as a baby and over several years grew to become an adult. He was born in Leeds and - like Jon Snow - is immensely proud of being a northerner. In fact, there is nothing Michael enjoys more than eating Yorkshire puddings, whilst drinking Yorkshire tea, as he walks a Yorkshire Terrier across the North Yorkshire Moors.

As a child he spent many a happy hour with his family and - later - his three dogs (two real...one imaginary). At the age of eighteen he went to Lancaster University where he studied Russian history. Three years after that - and arguably less employable than he had been before university - Michael stepped out into the great wide world.

He quickly landed a job working at a sewage plant (true story) and used his hard-earned pay to buy a ticket to Australia. Michael spent the next year travelling with friends and earning money as a barman, waiter and - when things got really bad - a door-to-door phone salesman.

He returned to England, applied for a job with Derbyshire Police and in 2005 was appointed to the "Office of Constable" (aka...joined the fuzz). He enjoyed a seven year career in crimefighting and then promptly left it all behind in search of a fresh challenge.

Eventually - and in no way swayed by the long holidays - Mike re-trained as a teacher. He now works in a school in Derbyshire and finds something that makes him laugh each day. When he isn't working, reading, or spending time with his own wonderful family, Mike can be found writing stories.

Straybeck is a good read. If you enjoy the dystopian genre, you will enjoy Ryan’s travails. While the novel doesn’t break new ground, it’s a solid story with plenty of adventure. I look forward to seeing some of the subplots fleshed out in further books.

I hope to read more from Michael soon. Good luck on the new dog!

You have subscribed to alerts for Michael James Lynch.

You have been added to Michael James Lynch's favorite list.

You can also sign-up to receive email notifications whenever Michael James Lynch releases a new book.