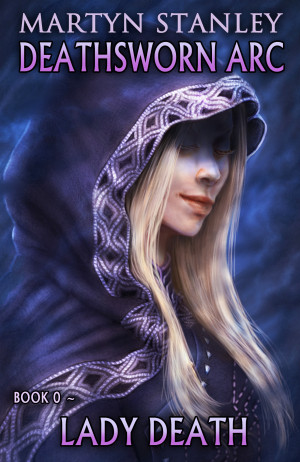 By Martyn Stanley
Rated 5.00/5 based on 2 reviews
A prequel to 'Deathsworn Arc: The Last Dragon Slayer' detailing how Vashni ended up in Trest and running into the companions. More
Vashni is doing guild work in Cormaroth, when a mysterious new mark is offered to her. The intended victim is said to hold a secret, so sensitive - the church has offered a small fortune to see the holder silenced. Can Vashni resist the temptation of a forbidden truth? Or will her whimsical desire for gold keep her on task?

Martyn Stanley is the author of 'The Deathsworn Arc' a epic fantasy adventures series dragons. He lives near the Staffordshire/Cheshire border in England, with his long suffering wife and two small children.

Martyn has always enjoyed epic fantasy novels and began reading them at a young age, starting with 'The Hobbit', ending with 'The Inheritance Cycle' and including everything in between.

His 'Deathsworn Arc' is more than a hack and slash, swords and sorcery series. It examines, faith, companionship, morality, pragmatism and more. If the characters of 'The Deathsworn Arc' come across as strange, it's partly because they're intended to. It isn't a series which will be dragged out indefinitely, it has a beginning, a middle and a definite end.

He already has the plot for his second series forming in his head.

He sincerely hopes you enjoy reading his epic fantasy adventure series 'The Deathsworn Arc' as much as he enjoyed writing it.

If you enjoyed my free, first book, why not buy me a coffee? - https://ko-fi.com/mstanley

Lady Death (Deathsworn Arc Book 0) by Martyn Stanley is a wonderful story that I have read. This is book 0 in this wonderful start to a brand new series writen by a brand new author for me to read. I hgihly recommend this story to everyone who loves reading about fantasy.

Quick little short story about Vashni, and how she came to travel with the companions. Gives her more of a backstory, than you had from the first book in the Deathsworn Arc series. Nicely put together, and very well told. The story progresses naturally, and flows evenly. Reading descriptions of things, I could actually picture it in my mind. You can read this first, or at any time in the series, as a filler.

You have subscribed to alerts for Martyn Stanley.

You have been added to Martyn Stanley's favorite list.

You can also sign-up to receive email notifications whenever Martyn Stanley releases a new book.