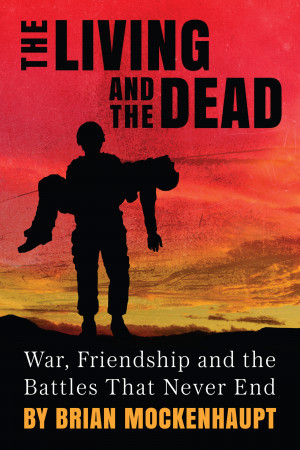 The Living and the Dead: War, Friendship and the Battles That Never End

In a quiet moment, Sergeant Tom Whorl scribbles in a small notebook. “The worst feeling is not knowing when your last step will be. That’s what takes a toll on your brain.”

With those types of simple words and keenly observed moments, Mockenhaupt captures the gut-wrenching day-to-day, life-and-death struggles and triumphs of the men of Patrol Base Dakota. This is the reality of combat in the twenty-first-century: Walking gingerly across the Afghan countryside in a nerve-wracking hunt for cleverly hidden explosives that can easily tear a man in half. Living every day knowing that a split-second decision can haunt a man for the rest of his existence. Enduring the unendurable because you’ve signed up to do democracy’s dirty work, and because you owe it to the guys on your left and your right. Back home, your family lives in dread. They watch out the window for men in uniform with grim faces, carrying unimaginable news.

The Living and the Dead is a moving and timeless account of bravery, friendship, struggle and sacrifice in the face of unimaginable tests. An unforgettable tale of battles that continue to rage long after the final shot has been fired, written by a veteran warrior and award-winning writer.

Brian Mockenhaupt is a contributing editor at Outside and is the nonfiction editor at the Journal of Military Experience. His work has also appeared in The Atlantic, Reader’s Digest, Esquire, Pacific Standard, Backpacker and The New York Times Magazine. He served two tours in Iraq as an infantryman with the 10th Mountain Division. Since leaving the U.S. Army in 2005, he has written extensively on military and veteran affairs, reporting from Afghanistan and Iraq, hometowns, and hospitals. He was the winner of the 2013 Michael Kelly Award for “the fearless pursuit and expression of truth,” and a two-time National Magazine Award finalist for feature writing.

You have subscribed to alerts for Brian Mockenhaupt.

You have been added to Brian Mockenhaupt's favorite list.

You can also sign-up to receive email notifications whenever Brian Mockenhaupt releases a new book.