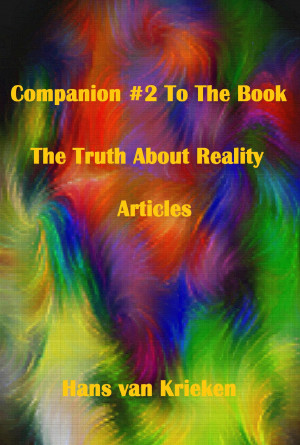 Companion #2 To The Book The Truth About Reality; Articles

By Hans van Krieken
The book deals with the dilemmas of physical life, our misplaced confidence in religion, political humdrum, our very lives, relationships and with our absolute ignorance of our reality. Every species experience a different way of being in reality. Reality presents a kaleidoscope of interpretations and effects. This is because we create our own environment and reality. This will blow your mind! More
This book can, and will alter your viewpoint on reality, your outlook on life and the universe. This material is out-of-the-box philosophy. Are physical creatures eternal beings cast in a prison of flesh or did life spring forth from an evolutionary springboard? If you have a strong opinion about these issues, this book will cut down the confusion and let you know what is what. After reading this book you will throw your beliefs out the window and refresh your uncertainty of beliefs with a foundation of certain understanding. Science and religion cannot bring true perception or redeeming knowledge. Things that cannot be seen do actually exist; and things seen can be fictions of the mind. Religious expertise and science always assume a stance of brilliant pretension because, in the end, that is all anybody presently can do. Hans will lead you from your expert opinions to an understanding of life that leaves modern knowledge on its pretentious end. Science looks at matter, religion on prophets, but Hans starts from a new viewpoint that reclassifies science as the creator of mere gadgets and religion as a stop-gap measure for your fears. hand does not deal in religion, but with spiritual realities found in the bible and saying by Jesus.
The more real and substantive life seems to you, the more it leaves you trapped, but this book brings understanding that leads to your liberty. It gives you a better outlook on life than any ideology, worldview, ism or religion to which you presently may subscribe. Hans knows how all these understandings listed above may hold you in their tight, brainwashed grip, because he, also, was so entrapped by several of the above, but they do not give relief from the gnawing doubts and uncertainty in your heart. Physical reality is the most deceiving environment we could have gotten stuck in but this book will eradicate doubt and uncertain belief and turn these into sure knowledge. If you miss this book no one can help you! Companion #2 to the book The Truth About Reality overrules human and so-called godly knowledge and cements these in a coherent new outlook that truly will set you free.
Christians believe they have it all in being saved in Jesus but they are mistaken. Jesus gave them the least minimal consolation price by them being saved from descending ever deeper into perdition. What Jesus truly wants is for you to discover the spiritual truth. Jesus claimed that the truth shall set you free from hell altogether and will return you to the spiritual realm as conscious and free entities. You, presently, are (literally) nowhere at all.
Mormons place their hope in a forgotten angel. But let’s face it, after Jesus came to earth there is no reason for god to sent angels or prophets. Jesus is the spiritual last word for all mankind. My books give what Jesus’ inner-teaching is all about. Without my books you are up the creek. For those who cannot trust me Jesus provided the emergency of being saved from being in Him; but yet, you are still in hell! believe you me! Whatever you believe in Christ or in Physical reality, it is just another false belief system/religion. Hans' book gives you spiritual facts found nowhere else. You forsake him, you forsake yourself. Hans does not deal in beliefs, he deals with true spiritual reality only.
Spiritual redemption takes wise philosophy to rediscover the spiritual truth that was lost to us by believing the lie the serpent/Jehovah told us the god of paradise -- the spirit in Jesus.

Hans van Krieken started out life in Indonesia, formerly the Dutch East Indies, in 1937. He was a prisoner of war of the Japanese as a child during WW2 and immigrated to Netherlands in 1947. He was shipmate for the Holland America Lines.
He plied the very stormy waters of the North Atlantic for 3 years, and experienced the angriest and the gentlest moods of those waters and the Pacific ocean for more years. He also sail-boated the waters off South America, the Caribbean and off the west coast of North America.
He became a US citizen in 1966. He has two sons. He was divorced after 16 years of marriage. His present marriage of 36 years is a great success, so he does not feel too much depreciated.
He worked as a designer and manufacturing engineer in the greater Silicone Valley sphere of industry, and also operated his own small business. Through the years he enjoyed glider flying, cruising, scuba diving, horse riding and researching American and Biblical history.
He designed cruising sailboat hulls and ocean-going commercial cargo vessel hulls. He is in the finishing stages of publishing a book “The Truth About Reality”.
He also holds a patent on his super-fast, super shallow hull design that will alter cruising and racing sailboat and super fuel-conserving vessel hull design in the future. He moved from Northern California to Long Island, NY to Maine and finely to the Asheville area of Western North Carolina.
I must say that my books recommend being saved in Jesus because it is 1, for free; 2, Jesus has that power, and 3, Jesus offers such being saved,4, it is essential because my very thorough research of Jesus is that he always tells the truth.
Before going on: they are the dedicated seekers who end up with the spiritual crumbs of truth! The truths I have received far surpass those of any guru, pope spiritual teacher and minister. Without reading my books you are utterly doomed. You believe I am full of hoot, but the loss is loss is entirely and forever yours; only I have the truth, so I do not give a hoot about your existence. Now, For a microcosmic mental picture of god read The Bunker Diary by Kevin Brooks, 2014 winner of the Carnegie Medal; then go on and read Hans' books. God allows for war, cruelty, suffering and what not. He has his reasons; we may not understand or agree with him. He knows what ultimately is best. The author is fully versed in the common Law of England, which is the common law in America. He has taken the semesters needed to cover trot, criminal, contract and real estate law. He plans to write a book about the way I see American political history and what it should be. There have been innumerable deviations from the original constitution, creative but unconstitutional cases were placed before the Supreme Court whereby both the attorney general and the supreme court allowed cases to be distorted in order to gain case law precedence for actions to be taken by government in the future (now well established case laws on the books). Deliberate wrongly worded phrases in some amendments caused the free and unburdened people to suddenly become subjects of the federal government.
Hans is in the final stages of completing a boxed set of five books The Truth About Reality. They all will, hopefully, be for sale shortly through smashwords.com. This set of the books Jesus said is the exquisite pearl a wise man will give all his treasures for.
These four books are entitled:
Companion #1 to the book “The Truth about Reality”
Companion #2 to the Book “The Truth about Reality”
Companion #3 to the Book “The Truth about Reality”
Companion #4 to the Book “The Truth about Reality”
I also have combined all five books in one book named "Boxed set of Five Books". It is available for 25% for free reading and because it has five books, the first book is almost entirely available for your perusal. If your device allows it use the epub reader.
About the book mentioned above; if they prisoners would have been reading the bible that would have been their ticket out! Because of the nature of god and because the nature of people humanity desperately needs a spiritual savior. Modern society is blasé about god, religion and spirit. It will be their downfall as it became theirs.
Basically, Physical life is a mystery. It is a mystery because in paradise we believed a spiritual lie that removed our consciousness from participating in that reality. It is our duty to solve the mystery of our present physical awareness and explain why we are isolated from spirit where we belong; in order to be reintroduced into spirit. To refuse to solve the mystery or to refuse to find evidence from others sources available like the resources I have for you means that you will permanently separated from your original source of reality and you will be bound to exist in this very uncomfortable physical reality – for ever.

About the Series: Boxed Set Of Five Books; The Truth About Reality

A set of books giving clear and concise information about the hidden truth of Jesus' teaching. This hidden teaching is finally understood by the author. The author now makes that hidden teaching available to everyone. The original message was for those who have eyes to see, ears to hear and a mind to understand to comprehend. The message was so well hidden, as the books will show that it took 2000 years for someone to gain access to it.

Also in Series: Boxed Set Of Five Books; The Truth About Reality

You have subscribed to alerts for Hans van Krieken.

You have been added to Hans van Krieken's favorite list.

You can also sign-up to receive email notifications whenever Hans van Krieken releases a new book.